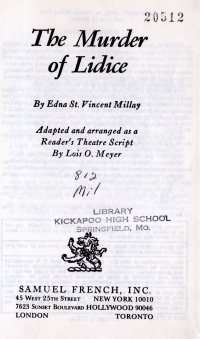 I might have read this in another form before (I have read plenty of Millay before, which probably lead to my fondness for clunky language and line).

The preface gives the book’s history:

This powerful and deeply moving dramatic poem is as contemporary today [1972] as it was in 1942 when Edna St. Vincent Millay was commissioned by the Writers’ War Board to write a poem immortalizing the village of Lidice, Czechoslovakia. This verse-narrative, arranged as Reader’s Theatre Script, very eloquently voices the protest and horror of all peoples of the world at the wanton destruction of the small village during World War II by the Nazis who claimed that the citizens of Lidice were harboring the assassin of Reinhard Heydrich, a Nazi henchman. Opening on the peacefulness of the village and daily activities of a peasant family, the action soon draws us into its suspense and mounting tension as Nazi soldiers enter Lidice, destroy every structure, kill every man, drive the women into “concentration camps,” and her the children into “educational institutions.” Written in a white heat of outrage and fury after news of the cold-blooded mass murder, Miss Millay’s poem has become one of the great literary classics opposing all war atrocities.

You can read more about the actual event on Wikipedia. Note that this is what actual Nazis did, and that the literal Nazis did not stop their reprisal with this one village. Contrast with political figures compared to Hitler in the modern world.

At any rate, this version of the poem is broken into different narrators so that different sections are told in different voices and sometimes the individuals mentioned in the poem can have a distinctive voice to present the sections of the narrative. I kind of ignored that because in reading, there’s little difference between Woman 1 and Woman 2 or Woman 1 and Man 2. The poem itself delves into the lives of a family in the village, two parents whose oldest daughter is getting to marrying age and is getting courted by two local lads when the Nazis arrive. It’s 32 pages of verse, so a pretty quick read, and it’s pretty well executed.

But it’s more interesting as a snapshot of a time in history where a group of writers came together to promote national unity in a war effort. A sepia-toned and faded snapshot when compared to the behavior of “poets” in the 21st century.

The copy I have is in a library binding from a local high school whose theatre program I support through my business. The book itself stems from 1972, and the checkout form in the back cover shows 11 checkouts in the 1990s. People who went to school with my wife checked this book out. Whoa.