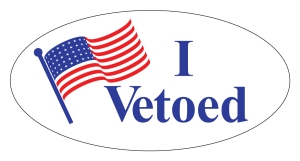 All the cool kids are doing it, so I thought I would mention how I voted this year:

And now that I’ve voted, I’m not going to spend the evening watching the election results.

And when the morning comes, no matter the results, life will go on much as it has before.