Editorial: Vote yes on Missouri Proposition B to raise the minimum wage, October 22, 2018:

The time has come for Missouri employers to get off the dime and start sharing their dollars. Minimum-wage workers are being forced to accept a pay scale that doesn’t come close to livable by today’s standards.

On Nov. 6, Missourians should vote yes on state ballot Proposition B, which would gradually raise the minimum wage by annual increments of 85 cents per hour, reaching $12 an hour in 2023. Don’t believe the opponents’ scare tactics about the damage Prop B might do to the job market. Putting extra money in people’s pockets is the fastest way to boost the economy. It also could increase state and local tax revenue by $214 million.

In at least 15 Schnuck Markets stores, the future is now.

Aisle-scanning retail inventory robots, known as Tally, will soon be wheeling around in a growing number of locations as the St. Louis area’s leading grocer expands its partnership with San Francisco firm Simbe Robotics.

The robot, which moves around on a Roomba-looking base, uses cameras and sensors to perform inventory checks and alert employees when an item needs restocking or if price tags don’t match advertisements.

Tally will keep its job at those four stores.

Schnucks plans to roll Tally out at four more stores in the next month: Granite City, Twin Oaks, Cross Keys in Florissant and Sierra Vista in Spanish Lake.

These two stories are UNRELATED! Unless you have contextual awareness and an understanding of economics. Which is pretty rare these days, no doubt. 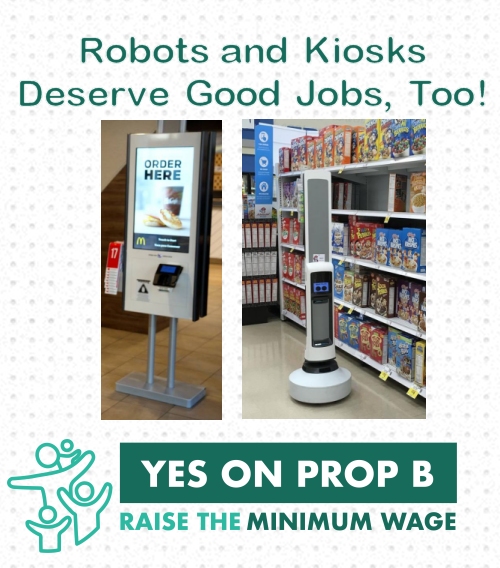 If I were a conspiracy nut, I would think that big tech was behind the drive to raise the minimum wage to sell more kiosks and robots.