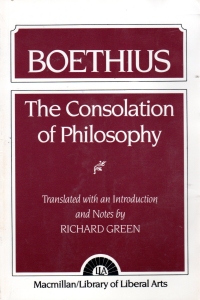 This is a pretty good Stoic tract from 524. Based on the introduction, which pointed out how much Boethius influenced medieval thought, I assumed he was a Christian, but the book itself talks about God but not Jesus, so it’s safer to just say he was a Stoic.

The volume comes in five parts, a bit of philosophical argument juxtaposed with a bit of a prose poem lyrically making the same point. The schtick is that Boethius, imprisoned and under the threat of execution, is looking for peace of mind. He goes to poetry, which has given him comfort in the past, but is ultimately unsatisfying. Then Philosophy appears, decked out like Athena, and explains to him the way things are. The five “books” within the volume start out with some basic fame-and-wealth-are-transitory, being-self-contained-and-true-is-paramount sort of thing you would certainly expect from a Stoic (or a Buddhist, for that matter) and moves into where true happiness and good come from. The answer, though, is not “inside yourself,” but God. After proving God via definition, Philosophy answers why it seems like bad people succeed in life, but good people don’t get what they deserve and then whether an ordered world with an omniscient God allows for Free Will or chance (the answer tracks with something I read by Mark Halperin in First Things magazine a couple years back–that man’s perception of the universe is temporal and different from God’s). Left unanswered is whether prayer can have any effect in such a scheme–that is, whether God can or will change his mind and alter the tableau, which would mean that what he knew was not necessarily the way it turned out. But prayer comes from a more Christian thought of a personal God, which, like Jesus, is not a part of this book or its arguments.

I really enjoyed this book, but it took me a while to actually finish it. I started it on vacation early this summer and tore through the first three “books” in it. When I got back, I carried it a bit, but I didn’t end up places where I read a carry book a lot, so I put it on my side table to read in the evenings, but I didn’t pick it up and propel myself through it until recently. Strangely, this has proven to be true with a number of books this year, so I’ll my annual completion number might catch up to its historical norm as I finish these books.

But it’s a better, more engaging intro to Stoic thought than Epictetus or Marcus Aurelius.

It’s weird, though, how I’ve never heard of this guy before. And I have a philosophy degree.