So a couple years ago (five? six?), my mother-in-law got my children a little indoor basketball hoop for Christmas. It was handmade from wood and had a Mizzou window cling glued to the backboard. She picked it up during her annual Christmas bazaar safari which often yields crafted gifts. It came with a number of soft balls or bean bags, long since gone. But when she gave it to the children, it was with the caveat: The decal was falling off or had fallen off, so Daddy would have to fix it.

So it went out into the garage, where simple projects go to die. Or at least languish for a long time.

As I explained when I put up my first DeRooneyfication post in 2012:

Sometime when I was reading some of his columns some number of years ago, I related to one of Andy Rooney’s situations. He mentioned going into his basement workshop and finding a number of projects that had been off to the side for a number of years, including a chair that needed fixing and whatnot. Even though I was probably just the long side of thirty at the time, it resonated with me, since I’d been collecting projects and materials for projects since before I got married. Now that I’m just the short side of forty–and soon on its long side–I decided to start finishing some of those projects.

Most of them aren’t long-term, time-consuming projects, either. Most only require that I set aside a couple of minutes on consecutive nights to take the time to complete the steps the project requires. They require that I put all the pieces and material together in one place and get the things done. That’s all.

Why have I decided to do it suddenly in 2012? Perhaps it is that birthday ending with a 0 coming up. Perhaps it is the new multivitamin that I’ve started to take because I bought it some years ago and might as well use (almost a deRooneyfication project of its own). Maybe it’s a function of having cleaned and sorted my garage and finding the projects and the tools and materials to complete them. Regardless, I’ve started completing projects of some procrastination. These are their stories.

Spoiler alert: I’ve almost finished that decade starting with 0, and the DeRooneyfication has not gone so far as to refinish the child’s chair or coffee and end tables set I got almost twenty years ago, disassembled, and then moved several times. It’s strange: I get these DeRooneyfication urges, and then I clear a couple longstanding projects, and then…. Years pass. I don’t know what it is; perhaps I’m back at it because my early summer schedule has been all akimbo, and I’ve not been to the gym or to martial arts classes regularly in weeks, so I’m restless.

At any rate, a workbench clearing and sorting (itself months overdue) brought the disassembled basketball backboard to the top. Why, I had the foresight those years ago to put the screws, hinges, hangers, and decal into a bag together, which differs from a lot of things where I take the screws out and put them into various recepticles on the workbench, where I never remember what they used to fasten, and when I get to an eventual screw cleaning, I’ll dump them into a jar or put them in drawers in the little organizer I have but from which I rarely draw a screw, bolt, or nail.

So with all the things together in one place and at the top of the stack, now, well, then wherein then means last week, was the time to put it together.

Instead of merely reaffixing the decal, though, I decided to make it look more like a basketball backboard. Originally, it had a natural finish, a light stain or no stain at all. So I sanded it and painted it white using some of the bin of acryllic paints I have in the garage from such projects as the lamp I painted in 2012 (DeRooneyfication II). It started out kind of slow because I generally like to let paint dry overnight, but learned that acryllics dry much faster (using an ancient mystic learning technique called “Reading the Bottle”), so I was able to apply a bunch of coats over the course of a couple of days.

Then I trimmed the clear-background decal a bit and découpaged glued the decal back on with several coats of the Modge Podge I acquired for the Volbeat plaque. Or perhaps this bottle was one I acquired years ago when Creative Juice still aired and Cathie Fillion used so much Modge Podge that she had a refurbished cement mixer truck dumping the stuff onto her projects (a slight exaggeration), and I thought I would do more découpage gluing than I actually do. Well, there was a serving tray with old recipes that hit the trash a couple years ago, and that might have discourpaged me.

To make a short story long (but not as long as the project’s wait in the garage), I now have a painted backboard with the Mizzou logo on it: 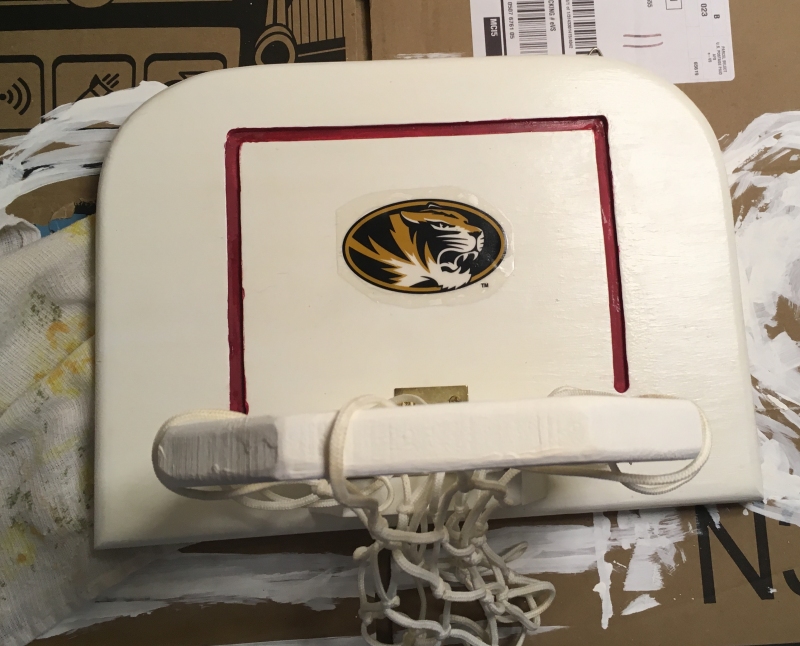 and actual basketball teams), and I would hate to just donate a gift like this that I did put some effort into sprucing up.

Maybe it will be regifted. Perhaps even to my mother-in-law.

On a related note, I did not actually triumphantly tell my mother-in-law that I fixed it up finally. I mean, I did get around to it according to the time frame instilled in me by my sainted mother (she didn’t like to rush into anything), but it took years. Once in a while, she (my mother-in-law, not my mother) comes up with a little something for me to fix, and I set it on or near my workbench, and–well, you know what happens. To be honest, I hope she’s forgotten this and many other projects that I’ll soon uncover in archeological layers in my garage.

So it’s off my workbench, which leads me to my next project from years past…

…which I will get to in the years to come. Maybe.