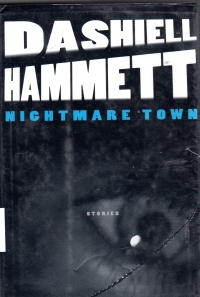 You might think Nightmare Town is New York based on previous evidence, but no. It’s a collection of Dashiell Hammett’s short stories. I would have expected that I read them since I have a couple of different editions of The Thin Man and The Glass Key, including two volume New American Library set, but those must only be the novels.

This book collects twenty of Hammett’s pulp stories, so you’ve got detective stuff along with the occasional Western. Several feature the Continental Op, three feature Sam Spade, and the first five chapters of his first stab at The Thin Man conclude the book (a little unsatisfyingly, though, since it does not resolve, and it differs from the published version enough that I wanted to see how this book ended, too).

The stories are terse in the pulp style–fancy that!, and they’re pretty good for the most part. Some of the plots a touch convoluted, though, and a couple of the stories turn on gimmicks, both of which are also a hallmark of pulp. But you know what you’re in for if you’re reading Hammett.

I’m pretty slow at reading short stories, though, as I’ve mentioned, since each story requires a little reset time that makes stopping easy at bed time. Still, I’m glad to have read it.