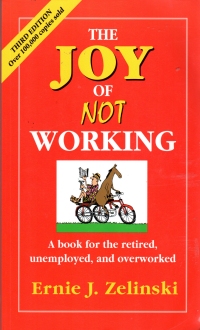 This book joins The Ruins and the complete works of Horace Algernon Blackwood as a volume that goes from my to-read shelves to my “read” shelves (which, you can see now, is all a lie) without me finishing it. I mean, sometimes I pick up a book and read a bit of it only to decide I don’t want to read this right now, and I put it back on my to-read shelves. Few are the books where I decide I will never want to finish reading this. This book is in rare company.

This book was written after the author ran a series of seminars and workshops on what aging members of the World War II generation should do as they retired and suddenly did not have a job to define them. So, somewhere in it, perhaps there are lessons in identity and establishing multiple facets of one’s own identity to account for a time when a job will not tell you and other people who you are.

But it’s hidden among a bunch of meandering and repetitive prose. I made it 56 pages, which is further than the two bookmarks I found in the book (a snippet of the job want ads from the St. Louis Post-Dispatch and a return address label). The book itself is only 203 pages, including big sidebar cartoons and quotes about employment and leisure. I carried it to a number of my reading locations, and I had to force myself to open it. Sometimes, I found staring at a cinderblock wall more rewarding than reading the book. I came to a list of things that might indicate your life was not in balance and you might have the wrong job, and I applied them to the time I spent reading this book. So I’m done with it forever.

Perhaps the message was on-point in 1997, but we’ve got a couple self-actualizing generations that have sought meaning outside work (or meaningful work instead of careers) since then. So many of the lessons aren’t applicable to more modern readers. Or they’re covered in the contemporary mindfulness movement, often more concisely.

I see it’s been updated for the 21st century; I hope the later edition has been significantly been rewritten. But I’m not risking it.