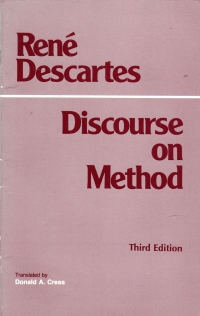 I’ve been listening to a lecture series on the Great Ideas of Philosophy, and as we’ve gone along, I’ve recognized the many of the seminal works mentioned as items on my to-read shelves. So I picked up this book because it’s not very long. Also, it’s at a turning point in history, right as the Middle Ages are ending and the Enlightenment is about to begin (although you could dispute with me the dates where this occurs, but I’m having none of it: this is my blog, and if I want to make interpreted remarks, I will, thank you very much). Also, it is only 44 pages, unlike, say, Being and Nothingness.

At any rate, the book includes the two big things one remembers from Descartes: I think, therefore I am (Section 4). That animals have no souls (Section 5).

Actually, while reading this, I had a brief conversation with a high school student who told me he didn’t like Descartes because Descartes said animals had no souls. I’d just finished the section, so I could explain in greater detail. Basically, it’s that you can build machines that will behave according to their parts, but humans are something else, as we can do things and communicate things that are outside of the physical parameters of our bodies. Animals, on the other hand, cannot. I conflate Descartes’ argument with something I recently read on the Internet about the language of animals, which says that animals can communicate through sounds, but they cannot create complex sentences that indicate conceptual thought.

I felt smart, anyway, being able to explain in more detail the argument. Without the pages and pages of explanation on the then-latest science of heart surgery prefaced with:

I would like those who are not versed in anatomy to take the trouble, before reading this, to have the heart of some large animal that has lungs dissected in their presence (for such a heart is in all respects sufficiently similar to that of a man), and to be shown the two chambers or cavities that are in it.

Well, I didn’t have advanced biology class, but I did see Indiana Jones and the Temple of Doom, so I was ready.

A lot of the discourse his explanation of what he’s done so far, and it ends with his talking about how he has not published a longer work after Galileo’s troubles, but he hopes that others will take what he has written and carry on other experiments according to his musings and using his method.

I’m glad to have read the discourse. As the conversation with the young man and the lecture series shows, it’s best to read the primary sources instead of relying on the summation of a thinker passed onto you by someone else. Also, the course helps put Descartes in context of when he wrote so that you’re not reading the book thinking it’s primitive and people have said this for centuries without focusing on when this was said and in what context.

So I’m pleased to have read it, and I feel smaht.