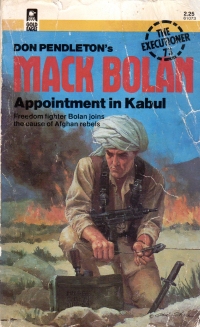 It’s unfortunate that the first Executioner book I picked up after reading Rated R was this book. Whereas Leon is funnin’ with the cartoonish violence in a bit of almost campy fun, I’m afraid the author of this Executioner book is earnest. Which is unfortunate, because we have ACTION! like this:

He encountered another two-man patrol walking its beat near the intersection midway between the blocks separating the high command from the checkpoint.

This couple did not know of their encounter with the Executioner until the heartbeat of their death.

He came at them fast, the edge of each stiffened hand slashing downward hard enough to break both necks. The soldiers crumpled to the pavement at Bolan’s feet with soft sighs.

And on the next page:

The Executioner tugged open the driver’s door, reached in and rapidly pulled the driver out, down into a raised knee that smacked the man’s face with such force, Bolan heard the neck snap.

I’m not sure the physics works out in either of these cases, but it’s sure like what you saw in the movies in the 1980s (and beyond). Old men’s adventure fiction was informed by authors who’d read classical literature. Some of these post-Pendleton Executioner novels are informed by authors who watched direct-to-cable actioners.

At any rate, the plot, ripped from Reader’s Digest reports: Bolan gets word of the Russians developing a new chemical weapon even worse than Yellow Rain at an out-of-the-way base near the Afghanistan/Pakistan border. Bolan hooks up with some mujahedeen and a CIA operative to find the location and put a stop to it. In a Bolanesque fashion.

It’s a cut below the average Bolan fare. I know what you’re asking: Does Bolan smoke? (As you may recall, gentle reader, Bolan did not smoke in the Pendleton novels, so I gauge how well the house author knows about the canon by whether Bolan lights a cigarette or not in any given volume.) Yes, yes, he does. And I get the sense he will more and more in the books to come.

I mean, look at this action bit in the wilds of Afghanistan:

He opened fire, the impact of so many bullets flinging the men off of their feet into shrubbery nearby where only their legs protruded, tremulous in death.

Leaving aside the comma splice which this particular writer loves to use, he describes bushes or brush as shrubbery (numerous times). Shrubbery is part of a garden or maintained yard, ainna? Not something you find in the woods or the mountains of Afghanistan.

Oy, vey. But the text of the book aside, we get some cinéma vérité or breaking of the fourth wall with the transcription of some espionage instructions from a numbers station in the front cover: 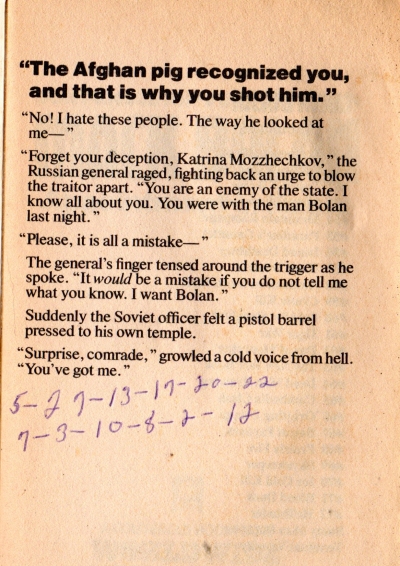 Lottery numbers, you insist? Maybe in your mundane world. But in my action-packed world, they’re espionage instructions.

Except I hope they’re not for me. We haven’t covered snapping two men’s necks simultaneously with knife hands in my martial arts class yet.

As you might know, gentle reader, you know I’m a fan of Linda Ronstadt, particularly her work with the Nelson Riddle Orchestra. And I adore Eydie Gorme. But who do I like more? Let’s put it to the test.