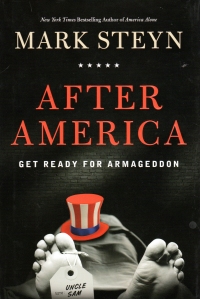 This book is quite a downer.

I read America Alone almost six years ago (when this current title was still fresh). This one is less optimistic: in the interim, America Alone (ish) elected Barack Obama, and several years’ worth of his policies were underway, so Steyn is concerned that America has joined the rest of the west in entering its decline. So he talks about what the world will look like after the United States cedes its hegemony to other nations with less noble intentions.

The thing I said about America Alone also applies here:

Five years after the book, I’m not as gloomy as Steyn was (and is now, given the title of his latest book–After America for those of you who might not know). The sweep of history is broad and long, and its predictors are more often wrong than not. However, the book does crystallize, or should, that our Western traditions and heritage are better than all the others that have been tried and do require some conscious defense thereof. If you merely enjoy liberty without recognizing its sources, someone will quickly take it from you.

Right down to how long it took me to read it after its publication.

As I said, it’s pessimistic, and it’s too much like reading his blog in book length. Which is to say, depressing if you take it too seriously. He might be right, he might be wrong, and most likely he’s part both. But there’s no good spending one’s evenings before bed wallowing in it. Also, the recent past might suggest a change in the wind for the United States which, one way or another, will render its half-decade-past prognostications out-of-date.

So read it if you’re reading this blog post from somewhere in 2011 or 2012 when it’s fresh. Otherwise, stick to shorter, current doses on the Internet.

And remind me to stay away from current events books at the upcoming book sales.