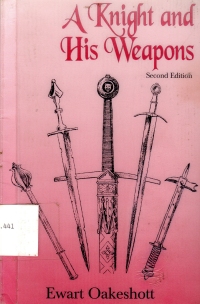 This book is a short discourse on the development of weapons from the middle of the first millennium to the middle of the second, but the focus is definitely on the period from roughly 1000-1500 AD. It says “Knight,” after all.

The chapters are broken down into weapon groupings: Spear and Lance; Axe, Mace, and Hammer; Sword and Dagger; and Early Firearms. The individual chapters are told in a bit of rambling discourse style, as though the author were speaking off-the-cuff, although there are a number of black-and-white illustrations included to show the weapon innovations as he talks about them. Unfortunately, these illustrations are a bit crude and might have made the text clearer if they were not.

At any rate, it was an hour or two through, as it only is a shade over 100 pages plus glossary and index. I learned one thing, for sure: I need a glaive in my personal collection.

Also, even though Ewart Oakeshott sounds like the name someone would choose in the Society for Creative Anachronism, he was a weapons collector and illustrator who definitely knew his material. It’s just that the presentation in this novel could have used some improvement with some charts and timelines and some better organization. But if all you’ve seen is the illustration in the first edition of Advanced Dungeons and Dragons, you could learn something. And by “you could,” I mean, “I did.” Although none of this material came up in the Geek Trivia Night I attended this weekend, unfortunately.