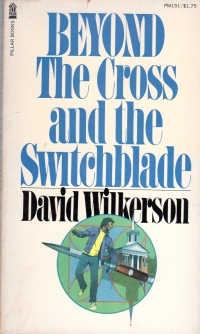 After reading The Cross and the Switchblade, I picked up this book right away because I didn’t imagine a situation where I’d be more primed to read it than right after the first. The effect is a little like reading Jerry Kramer’s books (Instant Replay, A Farewell to Football, and Distant Replay) in short order as I did in 2015: You get autobiographical glimpses of a person doing something and getting note for writing about it, and then you leap forward quite a ways and see not only the aftermath of it, but where the person is now and how hopes and disappointments accrued after the Big Book.

At any rate, this doesn’t have the narrative first half that its precedent did. Instead, it takes a bit of topical look at how things have gone in the interim. Teen Challenge, the thing that Wilkerson started in New York, has gone international, and he’s gotten to be a popular speaker and crusader, but he steps back from it because he wants more one-on-one contact. He learns about the rise of drug use among suburban teens and starts drawing attention to them; he tries to motivate them with some serious eschatology (which might have later been broken into another book). His wife and he grow apart, partly because he’s so busy and in demand and partly because they both have some trouble dealing with her bouts with cancer in the early 1970s.

It’s a bit shorter and less focused of a book, but it does lead one to understand some of the challenges of being a prime evangelist back in the day. Wilkerson lived into the 21st century, so he had a Web site and everything, which is odd to think about when you read his earlier book from times of the Sharks and the Jets (allusion footnote for you damn kids).

I’m glad I read it when I did, because as a stand alone book, it’s thin gruel, but as a companion to the earlier piece, it’s interesting and engaging. Well, for someone who can allude to 50s musicals easily, I suppose.