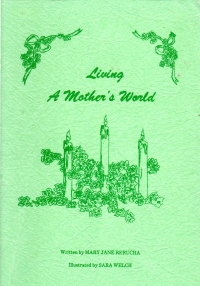 This book is a small, self-published collection of poetry by a Midwestern farm wife circa 1976. It’s on some very nice paper stock, so it probably cost a pile to print. The woman was committed.

It is broken into three sections: poems about family and motherhood, poems about landscape and the natural world, and poems about other things, like church. The poems are decent; some are rote sorts of poems like you get when someone sits down and thinks, “I should write a poem about x.” The poem celebrating the flag is like that. Others have good sense of rhythm and good rhyme schemes. The poems I enjoyed most were in the first section, poignant thoughts about growing children and looking back at them. I’ve decided I feel the same way about poems as I do about paintings: I prefer to have people in them and don’t really enjoy landscapes unless there are human figures in them. Which might be why I have so much Wordsworth around but haven’t read much of it.

As I read this, I thought about the number of magazines that I take that still publish poems. Since I did not renew National Review (too expensive), I’m down to Chronicles and First Things. The poems I see in them don’t touch me, generally, any more or less than the poems in these collections I read by unknowns.At any rate, a good collection of poems by a normal person. One or two of them might have been worth tearing from the paper or a magazine and putting on your refrigerator or cubicle wall. Which is about the best you can expect of any poet, really.