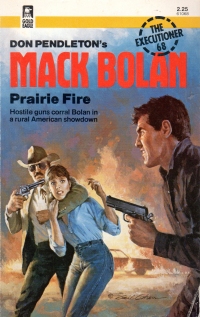 This book starts with a running man ploughing through Nebraska cornfields as professionals pursue him. Through flashbacks, we find it is Bolan, who was investigating some off-page MacGuffin that led to his capture and escape from a crew hired to hit him by the KGB. Bolan hides in a barn of a small farm, but finds himself captured by the farm owners and held until they start to believe his story that they’re in trouble with him there.

So the book turns into a tower defense story, with Bolan and the family hardening the household to withstand a nighttime assault. And so they do. Spoiler alert: Bolan lives.

It’s an interesting twist of a plot, as Bolan is usually on the offense so we get to see him build a defense. But sometimes I wonder how little experience with guns, military assaults, and whatnot the authors of the books have as they go on. When booby-trapping the house, Bolan makes a small IED with some C4 he recovered from an attempted carbomb, but he makes it so the trigger requires him to hit a small mark with a .22 shot–from a gun for which he has extremely limited ammunition instead of, I dunno, a tripwire? Also, the book describes the report of a .22 rifle as a falsetto yapping. I suppose that’s a metaphor that might work, except it doesn’t, especially when you don’t trust the author.

So it’s an interesting twist, but there are some things that give you pause. I can suspend disbelief until I start thinking I could do as good of a job as the professionals in the book. But those moments pass, and we’re through the book with some enjoyment in spite of it.

I only have 47 Executioner titles remaining on my to-read shelves, not counting the other related titles. If I keep at it at the pace I have this year, I’ll be done in under four years. Woo! Unless I buy more, which is always a risk.