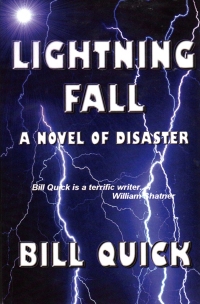 To be honest, this book was an add-on purchase. I’d created a CreateSpace account and added it to the cart, but I never completed the checkout process–I probably balked at the price. But when I found The Ballad of Ethan Burns on CreateSpace and put it into my cart, I found Lightning Fall already in it, so I bought it, too. Why not?

This book is longish–over 600 pages–and it reads a lot like a Stephen King book in that there are many different people in many different settings sometimes coming together but mostly dealing on their own with the fallout of multiple major terrorist attacks on the US. An EMP weapon detonates off of the west coast, leaving much of the US past the Rockies without power. A nuclear weapon detonates at ground level in New Orleans, taking out the nation’s biggest port and rendering much of the delta uninhabitable for centuries. A Mexican ‘relief’ army activates some irregulars in the United States to target military and civilian power centers and then invades under pretense of helping. Although it looks like an Islamic attack, there might be Chinese elements behind the scenes. A Hillaryesque president worries more about the party and the politics of dealing with the crises rather than the United States or its citizens.

The various peoples involved include a gay couple trying to shelter in place in San Francisco; a single mother in Indiana trying to keep her children safe; a Tea Party activist and his new beau in the Midwest; a shrimper in Mississippi and his family; a television crew from Denver trying to make their way west to report from the scene; a gang leader in LA with contacts in various foreign powers; politicos in Washington, including the President, her husband, and the Congressional leadership; a couple of military men in Cheyenne Mountain; and various others.

The book jumps between the people, focusing a lot on the San Francisco couple. Unfortunately, it jumps between the action in the affected areas and then goes back to Washington, where it works on political manipulation and, well, politicking. It kills off one of the focal characters and the whole story line is abandoned. Many of the storylines don’t converge; most of the stuff from the Midwest is just “slice of life” stories as people start to cope with the breakdown of society in the aftermath, but they do not contribute to the book’s main plot lines.

So the 600 pages of the book comprises a bit of schizophrenia (Is it a political thriller? Is it a thriller thriller?) with a bunch of extraneous matter (and I hate the Stephen Kingesque “Set up a character with a backstory and texture just to kill them off because that’s like REAL LIFE, man” thing). AND it leads up to the thrilling sequel, American Caesar, which the book claims will be available in 2015 (although I cannot find it), which means nothing is resolved at the end of this book except the political stuff in Washington.

So I am of two minds about it. I didn’t like it that much–the concept was interesting, and some of the characters were compelling, but overall the bloat and the lack of copyediting (a lot of typos throughout and calling one character by the wrong name early) diminished the book greatly. But by the time I got to the end, I bothered to look for the sequel to add it to my CreateSpace cart just in case it would become an add-on purchase sometime in the future. But it wasn’t there.

So if you’re up for a Kingesque rambling mess that clearly is self-published, you might like the book.

Also, I’d like to give a shout-out to my cat who heightened the tension of the book by knocking the cord of the reading lamp out of the wall while I was reading a book about an EMP attack, plunging the room into darkness. That added a touch too much of realism to the proceedings. As though the book’s plot wasn’t almost plausible enough.