This book is a self-published memoir of a man who served as a chaplain during the Korean War. It’s built from his daily journal, so each day or so we get a paragraph or two that details where he was going, what he was doing, and the services that he held. It’s a remarkable time capsule and throws light on the daily activities of a chaplain in a war zone that you don’t get from M*A*S*H‘s Father Mulcahy. I mean, he has a box he throws in his jeep, and that acts as his altar and whatnot when he stops amongst a squad or brigade to perform an impromptu service. He highlights a piece of scripture, does a short sermon, and then encourages the men. It’s remarkable; Griepp actually won a Bronze Star for performing a service calmly while getting shelled.

At any rate, I highlighted (well, flagged; I’m not the type to put my own ink in books) a couple passages for comment:

In response to a letter from his mother, I looked up Pvt Roy Hartford of the King Company, age 16, and arranged a minority discharge for him.

Can you imagine a modern 16-year-old lying to get into the military? It happened a bunch back then.

Met some of the Marines, as they are fighting right next to our troops. Good soldiers, too, neither superior nor inferior to troopers of the 7th Cavalry.

My whole line wilts a little at this thought. On the other hand, this is a chaplain, so he has to say nice things about his sheep.

May 12 is “M-Day” for Operation Mascot. All of these children had experienced abandonment, rejection, or loss of both parents. Now it was time for another separation.

Apparently, various companies adopted orphans and lost children, and it got to be such a problem that the Army had to make a concentrated effort to keep its soldiers from taking care of the weak and the unfortunate in a war zone. Contrast this with the behaviour of most armies throughout history. And make a point of it in a history class if you dare.

Our personnel officer and Lt Edward Jirikowik, the center company commander, are having a problem. The Lt is expected to locate men to fill vacancies for jobs other than riflemen. Rotation is sending the riflemen home, but leaving typists, drivers, radio operators, and wire men. Such men cannot go until they are replaced by men of like skills.

My father, fresh out of boot camp, was lined up with the others and the first ten men were sent to Okinawa for a clerical position if they knew their alphabet, and the rest went to Vietnam. Which is why my father spent his overseas time in Okinawa. I always thought he felt bad about that because it meant he was unable to fight with his mates, but he might not have liked it because it represented a lengthened committment. I’ll never know, of course.

At any rate, it’s a fast and fascinating read if you’re interested in the history of the Korean War or whatnot. As I mentioned, the book is not just a book, it’s an artifact of a man who wanted to publish it. Check out the rudimentary layout: 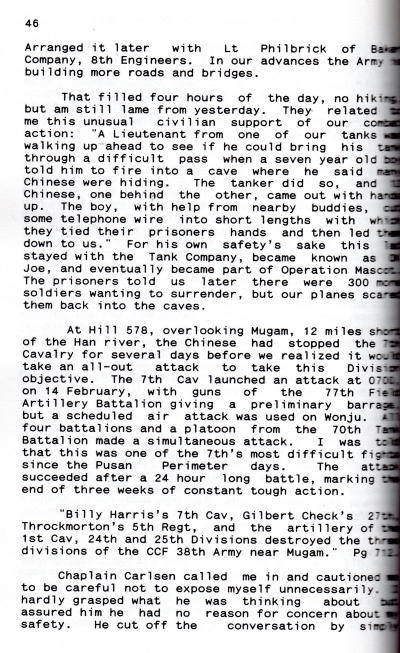 Dan Rather emailed me to say that was laid out using Adobe Pagemaker on an Apple II.

The book also bears an inscription to a presumed comrade (forty years after the conflict). The handwritten message is for the recipient to see page 28; page 28 is starred. I presume this is where the Chaplain and the inscribee met. I hope it’s not the first clue to a treasure hidden in the Korean wilderness since I mentioned it on the Internet and would have put myself in the crosshairs of unscrupulous fortune-seekers if I did.