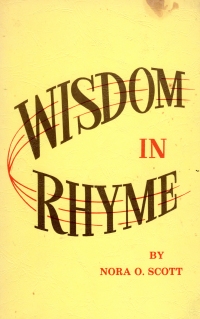 You know, there was a time when I might have made fun of a collection of poetry like that contained in this book. Probably a time when I was younger and more cocksure, a bit arrogant, and impatient with the mediocre in life. I was destined for greatness, and anything less than greatness was worth mocking. That’s what youth does, and growing older gives us a little better perspective on life and the pursuit of greatness.

So I’m not going to mock this book. The poems within it are not bad poems. I’ve read bad poems. These are merely common. They have end rhymes and a decent sense of rhythm. The subjects are domestic and landscapish and Christian, with a couple of little ditties about people she knows thrown in. She’s got a couple little poems about her children growing up or having grown up from being little babies. She writes about the landscape of Arkansas, her native state. It’s the sort of thing you see a lot of in small writing groups and clubs.

The poems span a number of decades; the book was prepared and maybe published by the pastor of her church ahead of her 92nd birthday in 1980. This volume was inscribed as a gift in 1984. So that’s what it’s circa. But it represents a woman of the ninteenth century, probably with limited schooling, writing poems for most of her life and not doing badly at it. So I’m going to appreciate that for what it is. She was reaching higher and giving it her effort, and her goals might not have been more lofty than having something to show her friends and family. And here it is.