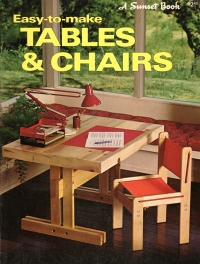 I’m a little behind in my book reports. I read this book shortly after I read Sunset Woodworking Projects (in early July), but I’ve not yet written a book report on it. BECAUSE I’M LAZY. Or busy.

At any rate, this book dates from the middle 1970s instead of the late 1960s, and we can see the movement from the old time woodworking book to the more modern way of doing it (step by step, more pictures) fashion that you see in modern books and magazines. Unfortunately, the pictures and the projects also come from the middle 1970s.

As it indicates, the book focuses on tables and chairs. The easier projects are simple things, such as a temporary chair stuffed with balloons or backless seats that are fabric over inner tubes (sadly, no projects for tables made from wire spools covered with fabric, but I suspect they were so prevalent that the authors assumed everyone already had one). Some of the other projects include more elaborate pedestal tables and whatnot, so the book covers a variety of skill levels.

Most of the stuff is beyond my skill level, possibly including balloon chairs. But it would be a good idea book for woodworkers with some seasoning.