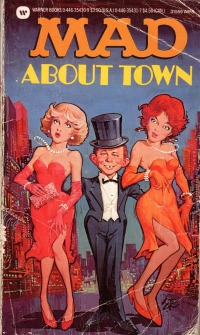 This book dates from 1976, but it was still in print seven years later. It collects Mad magazine bits from the early 1970s, including the send-up of All the President’s Men. As such, it might not relate well to today’s youth. I’ll have some first hand knowledge of this when my oldest boy absquatulates with this book.

I’ve moved out of the middle 1970s Mad demographic these days; while some things were amusing a bit, I only laughed out loud at two bits. One was about a boy who turned everything into a gun given a bat and a ball and told to go outside to play, and the boy promptly turns the bat into a gun (and, left unspoken, the ball into a grenade). I’ve got boys, and this is true. The second was about a man recounting an argument with his wife, and the punchline was very good indeed.

It’s a good reminder of how much most humor is rooted in its time, and how very little humor really hits upon the major themes of humanity that can extend across mere decades. But the best of it can do so without footnotes, and unfortunately, this book would probably need some if it were held up as a classic. As it is, it’s an amusing browse for an hour or so for old men like me.