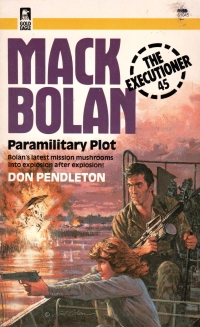 This book is another in the 1982 Bolan books; at this time, they seem to have gone to the monthly model, which means of course that individual entries are passed onto different authors, which accounts for an uneven series.

This entry isn’t bad, but its plot is exceedingly similar to the others reviewed recently (Terrorist Summit, Return to Vietnam, and The New War especially). In each, Bolan gets wind of someone being held in an enemy camp (twice a jungle, once a desert, now a swamp). Bolan infiltrates the compound, leaves the compound, and then has to go into the compound with the bad guys on alert to extract the hostage and blow everything up.

In this case, the hardsite is a compound in the Everglades run by a right-wing corporate government contractor who wants a biological weapon to facilitate the invasion of Grenada, where he can then start properly trying to take over the world for right-wing reasons, which seem to be just being corporate and having a military.

This book preceded the actual United States invasion of Grenada, so its author was a little prescient in recognizing the political situation with the small island nation making it unstable. So I got a little history lesson on that which covers some of the gaps I didn’t gather when it happened because I was eleven years old at the time and dealing with boyhood things, like my parents’ divorce and my mother’s nascent plans to uproot us from Wisconsin to Texas.

So, as a book, it’s too much in the line with then-recent Bolan offerings but an interesting artifact in a meta way.