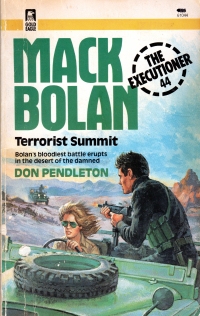 This book reads so much like an authentic Don Pendleton book that I checked Fantastic Fiction to see if Pendleton wrote it. He did not; Steven Krauzer did. Krauzer, apparently, had read some of the Pendleton books before starting out. You have a lot of the elements of the Pendleton Bolan in the book, but a decided bit of tomfoolery at the end that is uncharacteristic of Pendleton.

In the book, Bolan has to go to Algiers to look for a missing technology executive whose daughter was kidnapped by terrorists of some stripe. For ransom, they want a prototype suitcase nuke the exec’s company had developed. The man goes to Africa himself to find his daughter and is instead captured, and it’s up to Bolan to get him out. Bolan does so early, getting the nominal plot out of the way so it can turn Pendeltonesque. Bolan pursues the woman to a camp in the Sahara where a Soviet-trained bad guy has assembled a summit of numerous terrorist groups to organize them under an umbrella operation headed by him. Bolan infiltrates the base posing as a Mafia-based bigwig and turns the groups upon themselves. This is all pretty Pendletonesque.

However, at the climax, Bolan is escaping from the site in a Range Rover when a Jeep pursues. He puts down his rifle to pick up his trademark .44 and has the Range Rover spring into reverse so suddenly he’s coming at the terrorists hard and fast while firing the handgun. Instead of, you know, shooting them with the rifle from a distance.

The tacky ending makes me wonder how the whole business worked. Did the editors have this cinematic ending in mind and perhaps on paper when turning it over to the writer to fill in the gaps? I dunno, but it diminishes the book.

I’m going to start calling these things the thrown silverware moments in honor of Silent Night: an outlandish moment in the climax thrown in for cinematic value but that leaves any thoughtful reader agape.