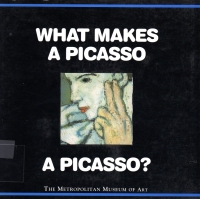 This book proves me a hypocrite. I’ve dodged cultural sensations like Harry Potter, Twilight, and Hunger Games because, I’ve ::sniffed::, they’re children’s books. But put a discarded library children’s book about an artist in front of me, and I’m all over it.

Because, let’s face it, my knowledge of Picasso is precursory. I know his era, his acquaintence with Gertrude Stein and the Lost Generation, and he did La Guernica which I did a paper on in college, although I’m not entirely sure what I had to say about it. Probably that it fought the norms of the day in which I wrote the paper, which strangely enough were sort of still norms instead of the anachronisms they are now. Everything else I got from Steve Martin’s Picasso at the Lapin Agile, which is why I’m prone to answer at trivia nights that Picasso knew Elvis.

This book is a simple little book from the Museum of Modern Art and takes a brief, high-level overview of Picasso and his work and its phases. So I learned a bit about his Blue Period and what he was trying to do with Cubism. Basically, it’s a painted collage of different views of the same image. Okay, I get it, but I don’t think it’s any less stupid.

So I got something out of this book, and it didn’t take too long to read. Best of all, there are others in the series with other artists, so I’ll definitely keep my eyes open for others in the line. Because I like to know a little bit about a lot of things, even though I have to go to children’s books to learn them. And it didn’t take a million words to get to the end and think it was stupid that Picasso and Hermione weren’t together.