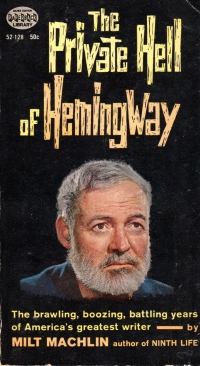 As I mentioned yesterday, I got this book in Orlando last week. I mean, I already have a hardback entitled Papa on my to-read shelves, but I was in Florida (although not Key West), and I was not that excited about my other airplane paperbacks (a fantasy called Catswold and a history of Australia by a historian). So I bought this book.

And read it quickly.

The author is an acquaintenance of Hemingway (who often refers to himself as “the author” when he meets Hemingway, so we get some weird things where one sentence says Hemingway and the next says “the author,” and you have to figure out if the author is Hemingway or his biographer). The book came out in paperback in 1962, very quickly after Hemingway’s suicide, and it has a title that was the postwar equivalent of clickbait. Obviously, they’re trying to capitalize.

That’s doesn’t matter, though; this is a very readable biography of the author (Hemingway) starting from his youth in Illinois to his success in the thirties and then his later career. The book follows Hemingway to Europe for World War I, the Spanish Civil War, and then into Spain for his love of bullfighting. It talks about his marriages to his four wives and his wild lifestyle. It talks a bit about his books, but this is not a literary criticism by any means. The book covers his trips to Africa, including the one where his plane crashed and how it affected the end of his life.

Strangely, the book really doesn’t dwell on the end of Hemingway’s life much, and if there’s anything in the book that it might present as hell, it’s Hemingway after his plane crash. But the book only mentions it, and the book’s end comes pretty abruptly.

Still, it makes me want to read Hemingway again. I haven’t read a Hemingway novel in the ten years this blog has been running, apparently, since a blog search only shows a little literary recap and no primary sources (but plenty of instances where I compare people to Hemingway). On the weight of this book, I checked online for complete collections of Hemingway, and the only one I see is about $2000 for an Easton Press collection. I’m adding it to my Amazon wish list for your convenience, gentle reader.

Recommended. But it’s not quite what the title would have you think.