The Detroit-born rock star encountered bad concert karma this week. A Native American tribe in Idaho canceled an August show he planned at its casino, citing his “racist and hate-filled remarks” as cause for concern. Soon afterward, a Washington casino followed suit, canceling two August shows for the same reason.

But Nugent’s Saturday show at Oshkosh’s Leach Amphitheater is still on and selling well — even though the performer, 65, had some choice words for his critics here.

In an interview with the Appleton Post Crescent, Nugent said Wisconsinites who are upset by him are “unclean vermin,” calling it “a badge of honor” to know that some people had problems with his Badger State visit.

He went on: “By all indicators, I don’t think [the critics] actually qualify as people.”

Nugent, 65, was reacting to the online uproar caused by a letter published in the Post Crescent by an Oshkosh resident that called for the show at the Waterfest Concert Series to be canceled, criticizing what the writer called “outlandish behavior and threatening statements that border on the obscene to the bizarre.”

Sorry, that’s a chain of thought, which might be a bit much for journalists. Here, I have produced a Venn diagram of the situation as Venn diagrams are very popular on Web sites that feature lists of pictures instead of flowing logical thought: 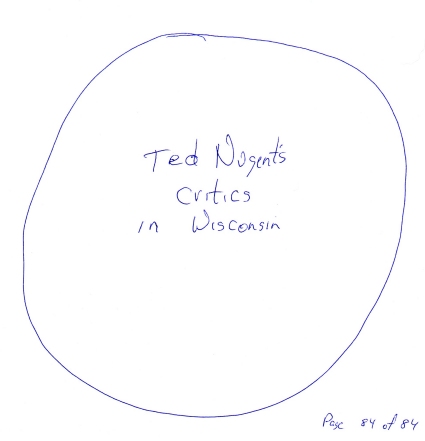 In a stunning turn of events, people who wanted to see Ted Nugent and know Ted Nugent did not boycott Ted Nugent at the behest of a letter to the editor.

Ted Nugent is conservative and outspoken. One would say extreme, but one who said that does not know the word hyperbolic. That is what Ted Nugent does.

What sorts of headlines did we see when the Dixie Chicks went off on the president of this country abroad during a time of war? “Dixie Chicks Mock President, and Commercial Appeal Evaporates”? No, see saw things like, “After Speaking Truth To Power, Dixie Chicks Release New Album”. Which did not sell, because the appropriate headline should have been “Dixie Chicks Offend Their Audience, Appeal To People Who Do Not Buy Dixie Chicks Albums”. The Journal-Sentinel headline would read “Dixie Chicks Express Right Sentiments, But Concert Sales Flag”.

It’s not even a matter of who’s right or wrong politically here; Ted Nugent played to type, and the Dixie Chicks did not. He said something characteristic to Ted Nugent, and Ted Nugent fans accepted it.

The perplexion comes in because journalists think what Ted Nugent said is wrong, and that the mere power of a letter to the editor should have illumined that to backwards classic rock fans and hunters in outstate Wisconsin. The unspoken follow-up, perhaps, is, “Gawd, people in the state where I live and work are soooo dumb! I wish I could get a job in Austin or Boston.” I suspect it’s there anyway.

(Full disclosure: I’m a lightweight fan of Ted Nugent, having bought a greatest hits collection of his on cassette way back when one bought greatest hits collections from record clubs one saw advertised in magazines. I also, when attending the university, was tasked with writing a myth for my Mythology class, and my shaggy long-haired nineteen-year-old self wrote about the invention of rock and roll where Prometheus “gives” an electrified six-stringed lute to a boy in Detroit, and the teacher asked me to read the myth to the whole seventy kids in the auditorium-sized class.)