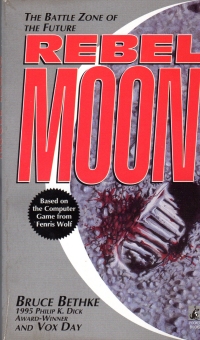 I picked up this book as I was browsing my bookshelves and the name Vox Day popped out at me. I’ve visited his blog a couple of times recently (and how recently that might actually be is subject to speculation, as we will see below), so that’s good enough reason to read the book immediately.

The book is based on a video game, but I’m no stranger to books based on video games (see The Dig or Halo: First Strike). However, the authors of the book are actually responsible for the game itself, so that means they have a greater understanding of it and can put the story they would want you to play into the book, kinda like I ran Dungeons and Dragons games back in the day: No matter what you players do, you’re not getting in the way of the good story I’ve put together.

The book deals with a lunar rebellion. It seems to me I just read a book about a lunar rebellion. Well, I did. In 2009. That’s the second time recently I’ve been stunned that so much time has passed since I read a particular book.

At any rate, this book is pretty good as a read, but. It jumps right into the rebellion, with the beginning of the rebellion and not a lot of leading material as to why the moon’s colonies are rebelling. The lunar colonists have secreted parts for weapons and materiel over the course of a decade (it is discovered). So the UN sends up Peacekeepers, which are surprised by the resistance. Then the UN turns to the Germans, and it gets complicated as they eventually start pushing the lunar rebels back.

It’s got engaging characters, including a proxy for the game-playing reader, a gamer himself who’s a good hacker. The technology isn’t dated in the book, as it’s the beginning of the Internet era so the projections aren’t squirrelly in other directions from where we’ve gone in these twenty years. There are a couple of spots where they shout-out to the video game — finding a hidden elevator, for example–but it’s got some depth that’s not grafted on.

Unfortunately, it builds to a point, and then, instead of a climax, we have the big reveal which is not exactly a climax and no resolution. After all, there’s a sequel to wrap it up. That’s unfortunate, but it doesn’t turn me off to more books by the author if I should find them in my immense stacks. But I’m not so invested that I’m ordering the sequel right this minute.