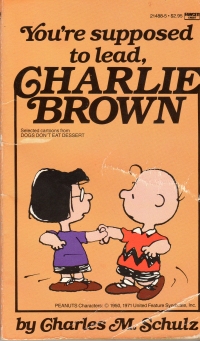 This book is not only a collection of Peanuts cartoons, but it’s a subset of a larger collection entitled Dogs Don’t Eat Dessert (1987).

It’s the story of Charlie Brown and his dog and his friends. Things you’ve seen and read before, especially if you’re old enough to have had fresh Peanuts when you were young. Which, strangely enough, means you’re older than high school.

But Schulz was pretty good at timelessness, I think, which is why, according to Forbes, his estate ranks highly amongst earnings from people who have passed away and why there’s still a major motion picture forthcoming.

I have nothing more to say except that I’ll read more Peanuts in the future. I like them.

If you’re interested in serious discussion about the themes within, see this book report from 2005: What’s It All About, Charlie Brown? by Jeffrey H. Lorria (1968). Accompanied by comments posted two years later to my old Blogspot blog by detractors of Jeffrey H. Loria.