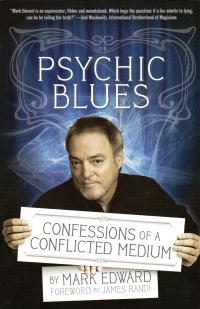 I bought this book from a book review in the Wall Street Journal. So that review was pretty compelling, and it sounded like it would be a fun book. And so it was.

Mark Edward talks about his life and times as a psychic. Well, he thinks of himself more as a mentalist, a showman who might have some gift but who mostly entertains people and sometimes helps them with their problems as a sort of counselor and storyteller. He doesn’t take himself too seriously, and he knows the business is some level charlatan and yet he’s hopeful he is making something good of it. Of course, he would, being the author of the book and trying to present himself in the best light. It makes for a very complex narrative voice that really pulls one along.

And what a story he tells. Edward has worked for the Psychic Friends Hotline, has done radio, has done infomercials, has worked the party circuit, and has done private readings for a fee.

So he’s earnest, and he’s self-aggrandizing, but he doesn’t take the business or himself very seriously, so the book was a joy to read.