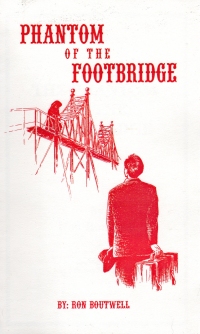 I picked up this book at the local used bookstore in its local interest section, but it doesn’t seem to be available online even though Springfield is lousy with them. It was published by a local Christian theatre company, and its protagonist is a young pastor who takes over a church (that later becomes the playhouse of the theatre company) in 1925. On his walk from the train station to the boarding house where he’s staying, a hooded figure meets him on a footbridge and tells the new arrival that he will bring a child who needs help tomorrow night, and the pastor must help him. This is the phantom of the footbridge.

It’s a very short novel–140 pages–carries with it more than a hint of Dickens in its plotting and characters. Unfortunately, the execution is not as picturesque as Dickens, but the author did a lot of research on the environs of North Springfield in the middle 1920s, and he makes sure to mention every landmark that people pass as they walk (not that there’s anything wrong with that). But the story lacks in those bits.

But I enjoyed it enough in its expository way.