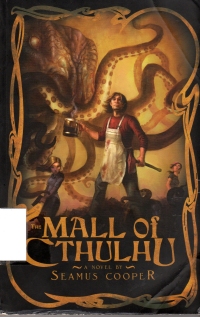 I was wandering around the library, minding my own business, when I caught sight of this book. At first, I thought the title was Call of Cthulhu something, as if Chaosium was releasing a set of new novels with based on the Cthulhu mythos and its roleplaying game. Then I saw it was not, and the title is what it is, and I thought all the better.

The books is about a young man who, as a college student ten years prior, but down a sorority house of vampires and rescued a young lady. The event wrecked his psyche, and he’s been a barrista, mostly, since that period, and he clings to the woman he saved. She’s joined the FBI and is in the Boston office, looking for Whitey. Their relationship is friendship-only since she doesn’t have a lot of respect for him and because she’s a lesbian.

One day in his coffeeshop, a bad customer leaves behind a MacGuffin, a computer disk, that the man pockets. While he delivers coffee to his FBI friend, the bad guys shoot up the coffeeshop looking for the disk. It contains login information for a Second-Life sort of virtual world where the guys are working together to piece together a working incantation to awaken Cthulhu, and they’re going to try it at a mall near a power center.

It’s an amusing book, and I enjoyed it. It’s not a thoroughly professional job, as the pacing is just a little meandering at times where some excess is not trimmed–who am I to talk? It’s got a bit of an X-Files vibe going on and a touch of Odd Thomas in it, albeit in the third person. By that, I mean it’s conversational, and there’s really no sense of menace to it. You don’t think the characters are in real peril–who am I to talk?–and the climax, such as it is, doesn’t really seem like a climax and there’s a second subadventure climax in it.

Still, I liked the book enough that after I finished reading it and returned it to the library, I ordered it in paperback just so the author could get his buck-three-eighty.

So now that that’s out of the way, it’s back to H.P. Lovecraft: The Complete Fiction. Only 250 pages to go.