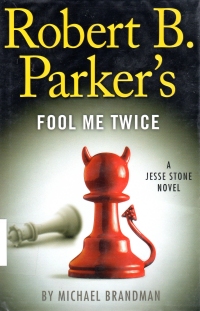 I got this book from the library based on the reading I did on Brandman’s first Jesse Stone novel Killing The Blues. The books are incredibly similar.

First, we have the multiple subplots, including a young woman in jeopardy. This one is a rich girl acting out because…Uh. I forget. Because it’s good TV. So throughout the book, Stone busts her a couple of times, gets her into court, and gets her community service duty at the police station. It’s interludes to pad the book.

The main plot is about a movie being filmed in Paradise. It gets a little crazy, but not as crazy as the soon-to-be-ex-husband of the star, who wants revenge and has just enough money for meth and a cross-country trip to kill the only woman he ever seduced-while-bumped-up-and-then-married.

So Stone brings Crow back to Paradise to protect the starlet and, when that fails, to help run the bad guy to ground.

So it’s very much like the first book in the whole protect-a-school-girl, killer-from-California-comes-to-town thing going on. We’ve got another love interest who pops in and then departs. It’s still an okay bit of reading, but since it tracks so close to the first of Brandman’s efforts, I’ve got to wonder whether he’ll bring fresh ideas into the next book or just continue to go with what he knows and risk book sales on account of it.