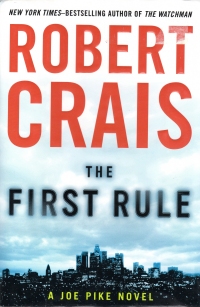 This book is the second of three I received for Christmas from my beautiful wife, and it actually precedes The Sentry, but the events within the books are not so developmentally tied that you can really tell. Crais is keeping the novels episodic enough that you can pick them up in pretty much any order. Series business doesn’t make them a jumble if you read them out of order, and that’s might be something that keeps the casual reader who picks the series up more interested in reading earlier books instead of just following the series from the point of entry forward. Or maybe I’m just making that up. One could probably get a government grant for some scientific study on it, but where would one find study participants?

At any rate, this book deals with Joe Pike and his sidekick Elvis Cole (series readers will see what I did there) investigating the death of one of Pike’s former mercenaries at the hands of a home invasion crew run by a Serbian mob. As he investigates with an eye on vengeance, he’s driven to help an ATF officer on the trail of some missing AK-47s. Real ones, with automatic fire and everything. So he investigates, happy to find his friend is not involved in arms dealing but that his death was a by-product of the Serbians running the home invasion crew wanting something from the Serbian nanny.

It’s a mess of a plot, and the protagonists slowly unravel it. The book’s got a little wheeling-and-dealing with the mobs and a little humanization of Pike, but not too much to tip the book out of a very sweet balance.

As I said in the report on the earlier (later) novel, I enjoy these books at a bit of a deeper level than other recent crime fiction I’ve read. It’s a shame Crais isn’t more prolific, but when you’re prolific (like Robert B. Parker was), you get all the flaws of thin novels, so I’ll just take what Crais dishes out slowly. Well, eventually, when I realize several years have passed and I ask and get them for Christmas.