So, as I mentioned in the book report on Yakov Smirnoff’s America on Six Rubles a Day, I might just bump into Yakov Smirnoff one day. Over the weekend, I happened to be in Branson, at the foot of the stage of the Yakov Smirnoff Theater, and there he was.

So I’d bought a bagged set of a book and a DVD for the low, low price of $20 (when in Branson, do as the temporary Bransonians do, which is spend money like it were nothing at all). I was disappointed that the book included was AMoSRaD (he wrote, introducing the acronym that Yakovites everywhere will put into play on the Internet starting now) instead of Smirnoff for the Soul, a later volume.

And I got a picture, of course.

“I’m going to give you the presidential bow,” I said. 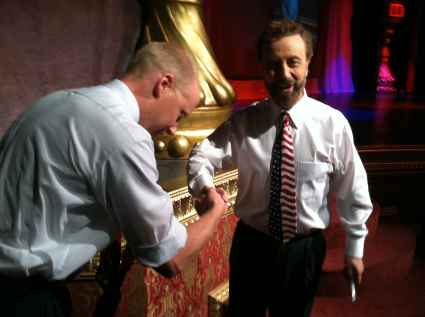 He didn’t get it.

Ah, but someday, he will, and he will laugh.