Back in the very early 1990s–like 1990 to 1991, which is really the very late eighties and the first year of the nineties if we must be technical, but since this is a personal narrative essay we don’t, so it was the early 1990s, dammit–I was a student at the University, living in the far northwest corner of Milwaukee, and about two blocks from the Mainstream Records at Fond du Lac and Silver Spring roads. Which explains where much of my non-tuition grocery store paychecks went in those days.

One of the things they offered was cheap 10-packs of used 45 rpm singles. As I understand it, the jukebox and amusement route guys would pull out-of-date singles from their record machines and they’d get packaged in cellophane and marked a couple bucks for ten. The wily packagers would put one hit record on an end so you could see it was worth it for that record alone, and you’d gamble on finding something you liked in the midst of the pack, too.

One of the packs held a single by a band called Madhouse. The first side is 6, the second side is 6 1/2. They’re both instrumental, almost skaesque funk jazz (I know now). I liked both of the songs in 1991 and looked to see if Mainstream had a full album, but they didn’t. And that, children, in the days before the Internet, was that.

Well, I could have had Mainstream order it for me, but it never came directly to mind.

So I’m in the process of unboxing all of my records and shelving them near my record player, and I come across the single again: 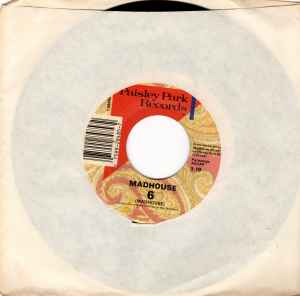 Well, my friends, this is the 21st century, and research comes easily on the Internet, and within moments I discovered that Madhouse was a side project of Prince, and that he played most of the instruments in the songs, and that “Madhouse” opened for Prince on one of his tours. I also learned that ordering Madhouse CDs new is prohibitively expensive ($50 on Amazon).

So my little single is a collectors’ item! Well, not so much; they can be had for $3 on Ebay.

But still, I’m amazed what I’ve learned about a couple songs on a little record I loved. I mean, I could have, I suppose, been a bigger Prince fan and known what he was up to (or that Paisley Park was his record label, which might have been some clue–my wife saw the single and thought immediately it was a Prince song). I could have kept up with the magazines to keep abreast of the musical news in the 1980s, but the same cash could go to the 10-packs or the $2.99 cassettes on the discount racks at Walgreens, from which I discovered favorites like a-ha and The Cutting Crew.

So one minor mystery in my life ends with a bright enlightenment and amusement.

I’m going to have to put that whole album on my wish list or something. Hey, I have a birthday coming up….

1 thought on “Brian J. Noggle and the Adventure of the Accidental Collectible”