Folks hounding Chesterfield officials over the years for a dog park finally have a reason to howl in celebration.

The $118,000, two-acre Eberwein Dog Park, the first dog park in the city, is set to open to Chesterfield residents on Sept. 1. The dog park is within the new 18-acre Eberwein Park.

And I got to thinking, how else could the few who own dogs further soak the taxpaying public? And then it hit me: Public, compulsory dog school.

Listen, when you argue with a liberal about public schooling, he will say that it’s best for a civilized society as a whole if its citizens are educated in a mass-produced Procrustean factory of leftist indoctrination (well, he will say all of it up to the prepositional phrase). Then, if you show him this chart: 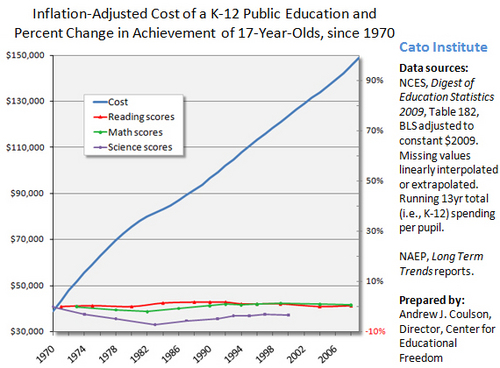 He’ll say something about how the increased funding raises minorities scores or something, not caring that the math indicates that a whole lot of scores have to go down to make a flat average when the mythical increase of minority scores. But that’s neither here nor there.

And if the costs are astronomical and rising compared to the benefit? That’s what quantitative easing is for. QED.

3 thoughts on “Public Dog Schooling: An Idea Whose Time Has Come”