I hope this tattoo fixation in our culture has just about run its course. It was bad enough when people put cutesy little pictures you could recognize, mostly, when they ordered them inked onto their bodies. A little butterfly on the shoulder, a little flower on the ankle, a little skull with a dagger through it on the forearm, I get it. I can catch it in a glance and get the drift of what your self-image is. 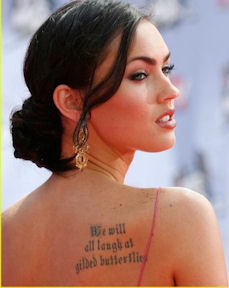 But now we’ve moved into text, heaven forfend. I feel self-conscious enough when my gaze lingers on a woman’s chest just so I can read her t-shirt, but now we’ve got people putting lines of text in fancy script on their bodies. Megan Fox, for example, has a couple samples of this upon her. Matt Holiday, the St. Louis Cardinal, has some line of text running up his left arm, aligned so it’s readable when he’s stretched his arm out horizontally, such as when he’s batting. I hope it’s a taunt to the opposing player, but word is it’s a bible verse, or so I read on the Internet. I cannot read it, since he’s always fidgeting or swinging the bat when it’s on camera.

Today, at the YMCA, some dude had finished his run outside and was cooling off at a bench as we came out. He had his shirt off, and on his right torso I swear to deity he had a freaking paragraph. Some five or six lines, probably, in an italicized or right-leaning font, justified no less to make a block of text that looked like it might wrap all the way around his side from his back to his front.

Are you kidding me? What is someone seeing that supposed to do? Stop to read it, maybe put on reading glasses to do so, perhaps ask him to turn a little as one follows the words? Come on. This is trying to make it look like you have a tattoo with a deeper meaning than a picture and less passé than an oriental character that probably means something other than you asked for anyway.

For Pete’s sake, if you find a saying you like that reflects your lifestyle and ambition, get a journal with a bound cover and a nice pen and keep it there, or if you’re feeling risqué (sorry, WordPress had a sale on the character é, and I bought a bunch), write it on a notecard and tape it onto a mirror. If you’re compelled to share it with everyone, put it on Facebook where we can read it without staring or feeling creepy. If you have trouble remembering things à la (buy two és, get an à free!) Momento, get a smartphone.

Because in 20 years, your skin is going to go to papyrus, and that tattoo’s going to look like a doctor’s handwriting.