Whenever someone in the family passes away, I seem to get some collection of clothing to wear. I have shirts from my father-in-law who passed away a decade ago (in retrospect, he was my father-in-law for a very short time). When my wife’s uncle passed away a couple years ago, I got a number of his shirts, too. Although he had shorter arms than I do, I tend to wear them rolled up, so no problem. Heck, even when my mother passed away a year and a half ago, I found some t-shirts and flannel shirts that she’d bought at garage sales that were large enough for me to wear. So I haven’t bought a casual button up shirt in about a decade.

That said, there are several articles I’ve received from my ancestors that I own but will not wear.

The first is a sweater from my father: 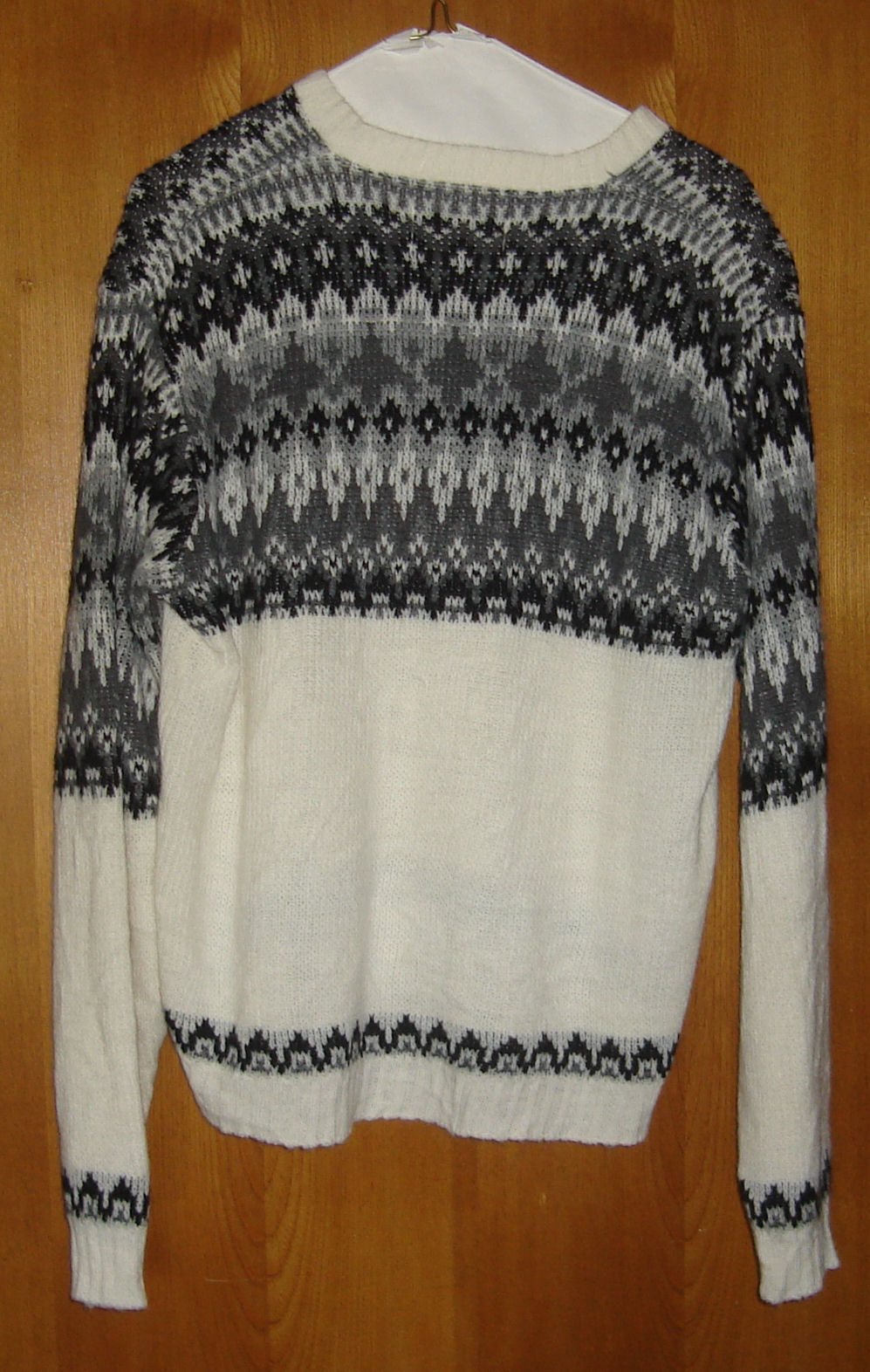 I lived with my father and his second family while I attended the university, and he gave me this sweater from some reason. A girlfriend from his high school years (Karen something–Adams?) gave it to him. I wore it a couple of times, but it is a little small on me and a little thin. So now it’s a keepsake and one of the few mementoes I have from him (therein lies an ugly tale).

I also have a t-shirt from him, the one I had given him for Christmas right before he died. It has a couple of hunting dogs on it. He was always really hard to buy gifts for. I want to give something he would enjoy instead of something merely functional, like socks or whatnot. I’d like to think the t-shirt fell into this category. I actually wore the t-shirt for a while, but eventually realized when it wore out, I’d have one less thing of his, and I’d hate to ever use it for dusting cloths and the other repurposed uses of the worn out t-shirts.

The next is my mother’s old bowling shirt:

When I was in late middle school and early high school, my mother joined a bowling team with my Aunt Dale and the man my grandmother married (we never called him grandpa or the like; we called him “Herb,” but we did have affection for him and reflect upon him fondly even now–the “man my grandmother married” describes him neutrally in this regard).

Friday nights, she would drive from our trailer in Murphy to Arnold, Missouri, to bowl with them. She got the Most Inproved Bowler trophy one year (the bowling alley’s trophy shop was notorious for misspellings; my trophy from the same place was for High Score Pac Mac). Some nights, we would accompany her and get a couple bucks for the ten or so video games they had (bubble hockey, Afterburner, Double Dragon, and Pac Man among them). It was almost three hours to kill, but we used the little bowling alley amusements that kids devise when exposed to the same location for a couple hours a week on their own. Hide and seek and similar things.

My mother, a single parent struggling to keep herself and her kids afloat, did not get much social time for herself. A couple bowling leagues and the Optimist Club were the bulk of it.

Then, of course, there’s her Marine dress uniform jacket: 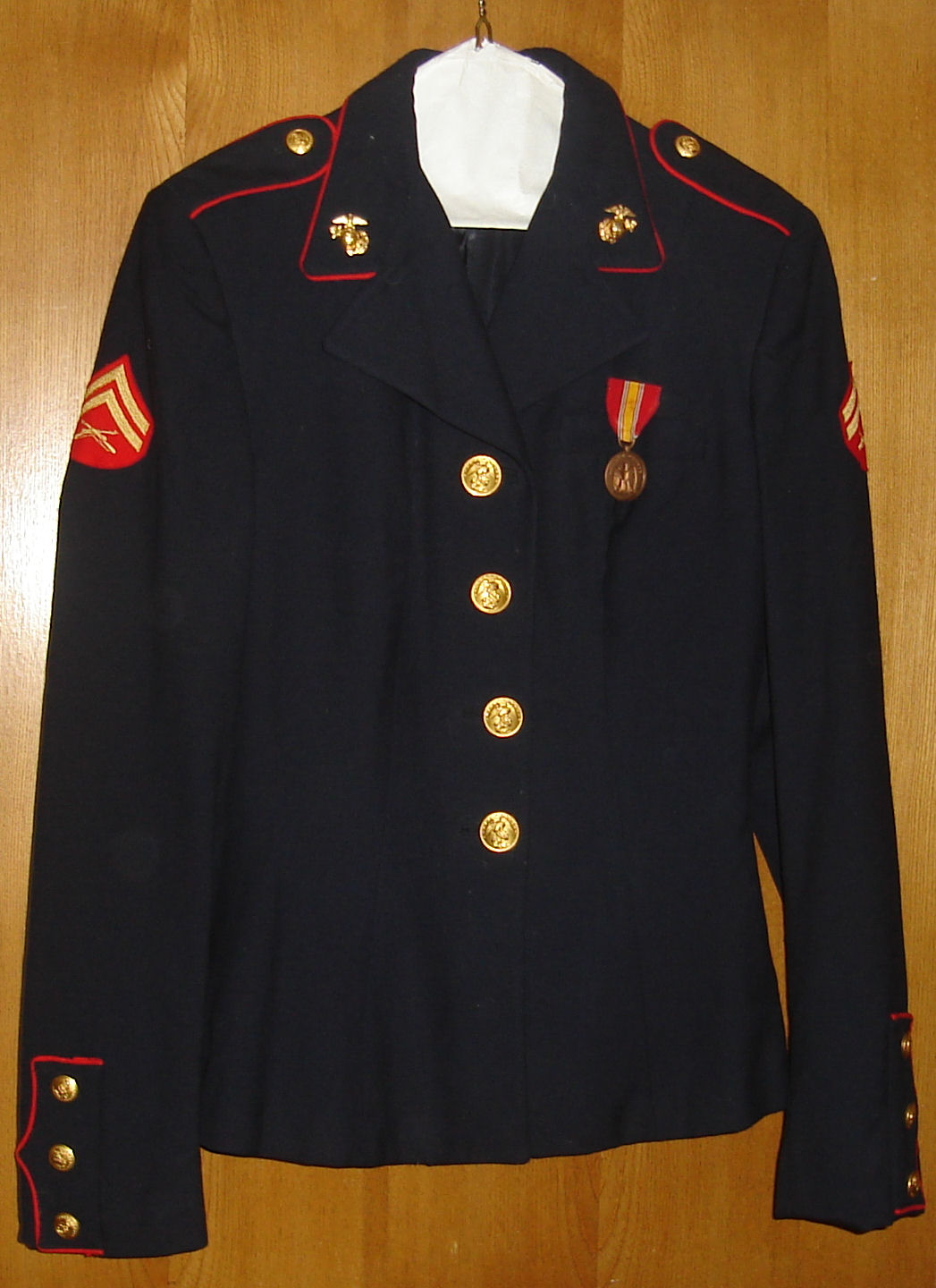 When picking out the clothes with which to inter her, we took a nice blouse and pair of slacks instead of the Marine jacket. I didn’t know where it was, and I didn’t even know if she still had it. I didn’t discount the possibility that she might have sold it in the lean years. However, when we closed her door to her bedroom, we discovered it was the first thing on that particular hook. She was very proud of her service, so I should have known better. Strangely, she could have still fit in it in her later years; as a matter of fact, it probably would have been too large for her, since she lost about 20 pounds from her induction weight.

So there you have it. Three (four) articles of clothing I own which I won’t wear and will not part with.

1 thought on “The Raiments Of My Ancestors”