You cannot find this book on the Internet, mostly because it’s a 40-or-more-year-old (although I think it’s a later printing, but it’s still undated) comb-bound publication of the Naborhood Link News, a small free newspaper in south St. Louis County at the time. It’s a little better than photocopied typewritten article proofs, but the content is fascinating. 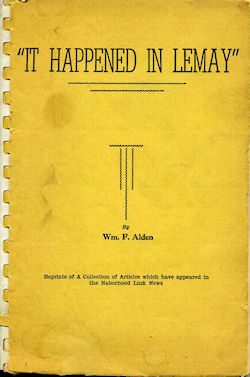 I lived in Lemay for a couple years in the middle 1990s, when the Naborhood Link News still existed (it ceased publication in 1996). This precedes my interest in reading up on the history of the region where I live, so I overlooked this book at that time. But Lemay has a far greater history than Webster Groves, word. Currently, the Lemay area is kinda defined as a portion of the unincorporated area in South St. Louis County where they tried to make Southpointe (with an E, like the car dealership whose owner led the charge) and that the small, 900-resident Bella Villa, best known as the eight-square-block speed trap on Bayless Avenue, helpfully offered to annex about the same time. However, historically, the Lemay area used to include Affton, Lakeshire, St. George, and a bunch of other municipalities that later made their own little town halls to…well, I suppose, impose a subdivision’s will on neighboring subdivisions.

The book tells anecdotes about Jefferson Barracks, how the villages that came to comprise Lemay were founded, the origins of Lemay Ferry Road and Telegraph Road (this last used to be called “El Camino Real” because it was built when the area was under Spanish control, which preceded French control, which preceded the Louisiana Purchase). A restaurant my wife and reviewed for our wedding rehearsal dinner dates from the 18th century; Lafayette purportedly stayed there once. Lemay was once considered for capital of the United States (story here).

And so on. Of course, the stories are all told informally with a lot of basis in recollections of the locals and some recourse to Missouri history periodicals. However, it’s best not to take them as the gospel truth. Still, good starting points for historical research or, at the very least, good legends to pass on.

I didn’t live in Lemay for that long, although my mother, the former owner of the book, lived there for much of her life, so I drove down some of the streets mentioned in the book (often accompanied by parentheses and “Now called Orient Avenue” or “Now called Ripa Avenue”). I sort of wish I was still in St. Louis so I could go look to see if many of these locations remain after the sixty years between the book’s publication and now.

As I mentioned, I inherited this book from my mother, who might have inherited it from her sister or mother. I wonder if my mother read it. I wish I could ask her and talk about it with her. One of the things I used to do on Sunday mornings was to have breakfast and coffee with her and regale her with stories and histories from books I read. This would be extra poignant as it is a book about her town.