Springfield, Missouri, recently put up a set of wayfinder signs. What are wayfinder signs, you ask? Expensive. Springfield spent $700,000 out of its capital improvement budget to put up signs with helpful arrows to Downtown, the Battlefield Retail District, Bass Pro Shops, and so on.

Granted, I can understand why you might need a sign to indicate downtown, since there are few buildings over four stories tall in Springfield and a visitor might not realize that this cluster of short buildings is downtown. But does it really need signs indicating the Battlefield Retail district? You’re on Battlefield Road and there are shops. I suppose if there are tourists who cannot figure that out, we do need to point them to the right places to part them from their money. And Bass Pro Shops? If you’re someone who’s going to Bass Pro Shops, you’re someone who knows where it is.

No, the wayfinding signs are just a pretty way to spend money and to bow to peer pressure of other cities that have wasted money putting these things up. I can’t be the only one to notice that candidates for office often stress that they’ve lived in an area all their lives and know the solutions the region needs, and then they go on a junket–I mean fact-finding mission or conference trip–to some fabulous location and come back with a bunch of imported ways to spend money to make this city look like that city.

Me, I just moved from a small municipality (Webster Groves) in the St. Louis area that put up its own wayfinding signs in the last two years so people could find the various districts within its 5.9 square miles, so I’m particularly stricken by them. In an era of GPS, people need these things less and less, and municipalities are going for them more and more.

A city that finds almost a million dollars (close enough for me) to put up these signs cries poverty for its capital improvement budget enough to extend a tax for its projects. Here’s a screenshot from the Springfield city government site listing those programs, many of which could have been paid for with this $700,000. 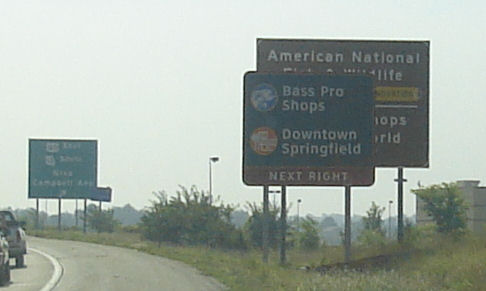 This sign, appearing on Eastbound 60/160 (The James River Freeway) just before the Campbell exit, stands less than 20 feet in front of a MoDOT sign that says pretty much the same thing and obscures the larger, already paid for, sign’s view.

1 thought on “When You’re In Government, You Never Have To Prioritize”