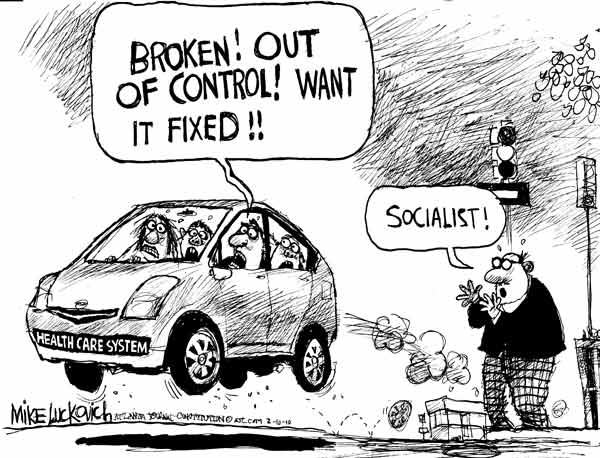 Given that this cartoon was reprinted this morning in the Springfield News-Leader only two pages before the story entitled Runaway Prius tale in doubt:

Investigators with Toyota Motor Corp. and the federal government could not replicate the runaway speeding reported by a Prius owner who said his car’s accelerator stuck as he drove on a California freeway, according to a memo for a congressional panel.

The memo, obtained Saturday by The Associated Press, said the experts who examined and test drove the car could not replicate the sudden, unintended acceleration James Sikes said he encountered. A backup mechanism that shuts off the engine when the brake and gas pedals are floored also worked properly during tests.

Sikes, 61, called 911 on March 8 to report losing control of his 2008 Prius as the hybrid reached speeds of 94 mph. A California Highway Patrol officer helped Sikes bring the vehicle to a safe stop on Interstate 8 near San Diego.

One would have to assume, then, that Luckovich’s metaphor is that Congress has made a stunt of a crisis for its own gain, would one not? Because that’s spot on.