This book collects a bunch of quotations and a couple of poems about happiness. Eh. But the best part is the photos ca. 1972 of people in various states of happiness and 1970s dress. I highlighted some of them when I bought the book, but let me share a few others. They always bring a smile to my face, announcing happiness. Or perhaps it’s merely a smirk identifying wry superiority; maybe that’s the best I’ve got. 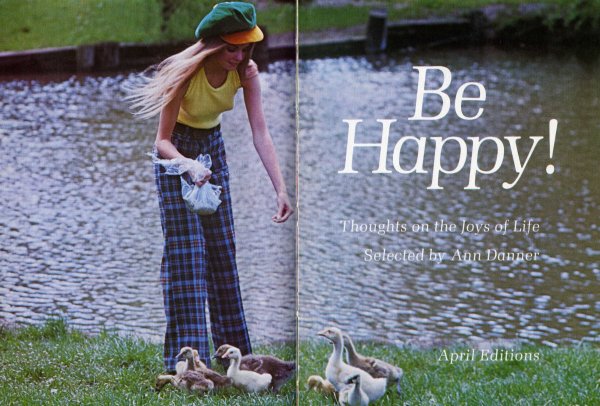 Ah, feeding marijuana to the ducks. Obviously, this is some weird LSD trip; I’d rather have seen an image from about two minutes further into the trip, where the ducks’ bills turn into little aligator snouts with six inch teeth and the hippie girl flees screaming from them, only to jump from a bridge into the dark safety of the water below.

“I’m not giving you the flower, lady; I’m trying to sell these weeds I stole out of Mrs. Busby’s garden so I can afford to buy a shirt or a bottle of Mogen David.”

I’ve had nightmares like this. I am a small child, falling, falling. Instead of hitting the ground, a strange man in a leather vest appears out of nowhere to catch me. It’s my father, and this is the genetical line which I perpetrate through my very existence! AHHHHHHHH! 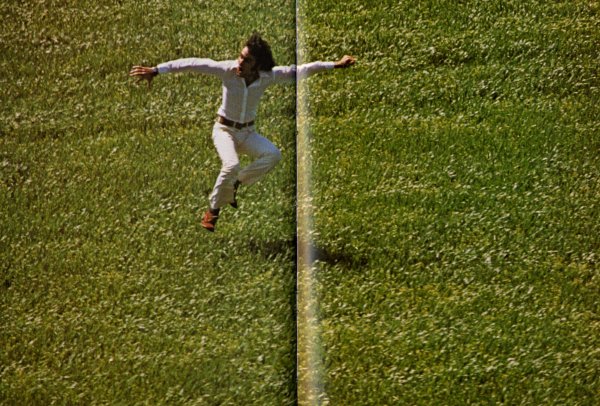 No, that’s not a fifty yard line or something that would make sense; instead, it’s the gutter of the book because an image this astonishing needs to be spread across two pages.

The prophet ran from the mountains and crossed the fields to warn the villagers that the discosaurs were coming. The villiagers thought he was mad. Only four years later, unheeding of the warning, the villiagers bought velvet suits and silk shirts with the top half of the buttons missing.

This is how the West was almost lost. I’d pay extra for a DVD that features these people in a deleted scene which depicts Clint Eastwood on his walking horse coming into the scene, getting told he was harshing their mellow, man, and shooting the man in the leg and freeing the Indian woman to go back to her tribe.

I think I paid a dollar for this book. I mean, the text is meh (which is about what one expects for a book that collects inspirational junk for review; it’s a hardcover Ideals magazine without the topical relevance). But the pictures are awesome.