This weekend didn’t really yield any good book fairs, but I got some books anyway. We started the day by hitting some garage sales that boasted books. In 2007, a garage sale apparently boasts books if it has two books, one of which is a self-help book and the other is a microwave cookbook from 1987. However, Christ the King church was boasting a deal that you could get anything you could fit into a grocery bag for $1.00. I couldn’t find a bag full of books I wanted, but I found three that looked interesting, which left room in the bag for a Kodak Brownie movie camera circa 1966 and a Molecular Visions Organic Model Kit.

We did survey a “book fair” at the Book House, a used book store I vowed some time ago to avoid since it was pricey and smelled of incontinent cat. Since, it was a book fair, though….

Well, it looked as though the “book fair” was regular Book House stock with a tarp tent outside. I guess some bit of it went to charity. I actually had three books in my hands before realizing that the books were priced as marked, and that roughly-used Dilbert book really was supposed to cost $7.50. I looked around a bit, but didn’t get anything; Heather picked up one book. We decided to go to Patten Books up Manchester and tell Mr. Patten we were there buying because we had been to the Book House looking. But he wasn’t in; however, five John D. MacDonald paperback originals that I didn’t own were, so I dropped $15.00 and change on them. Patten also had some later Gor books, as he often does, but I’m not far along enough to drop $20 on a paperback just yet. Maybe in a couple years.

So here’s our take: 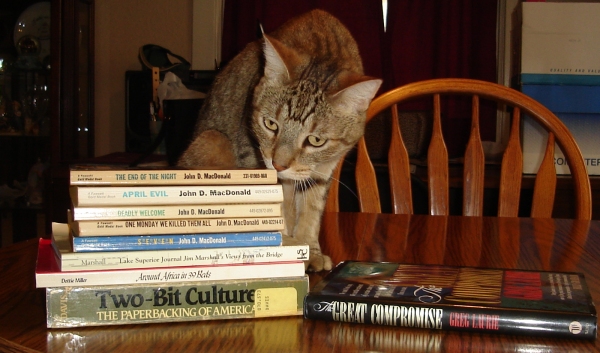 Heather got a book entitled The Great Compromise. Brownie and model kit not depicted.