I absquatulated from an informational stand outside the Convention Center Metrolink stop with this $3.00 Metro Guide for Fall 2006. Here it is: 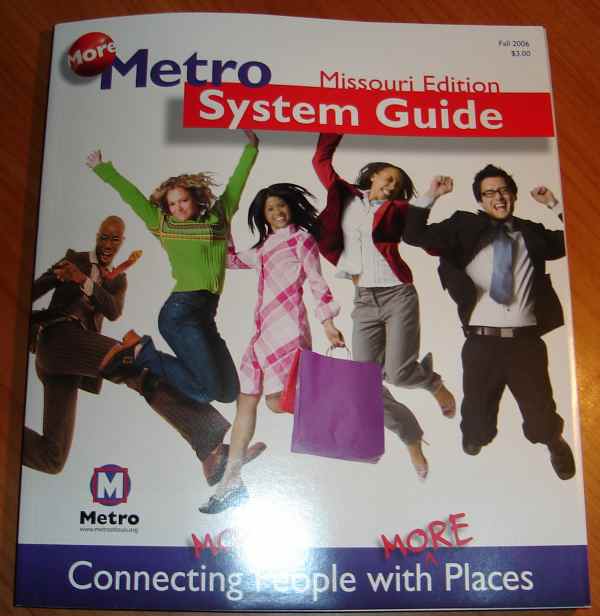 I cannot believe they put a cover guide on these things. I mean, who would pay $3.00 for these? Since it’s the Fall 2006 edition, I can only imagine that you can actually get a subscription, with quarterly editions mailed to your home every season.

For starters, that’s a sweet new logo and whatnot….when did Bi-State get a new branding as Metro? It must have happened while I wasn’t paying attention or mockery, because I just lost an argument about what the big M stood for. I guess by calling the mass transit system as “Metro,” Bi-State has hoped to conflate itself with its more useful counterparts in real cities. One has to wonder how many quarters of its regular losses this image recreation effort would have funded. Never mind the fiscal responsibility, there’s unlimited slush in the pockets of the taxpayers.

I have to wonder about the models on this cover, frankly. I really hope they’re stock shots of some sort or another, because I’ve never seen anyone that excited about riding mass transit. How professional can these models if they actually worked specifically on this project. What did the photographer to say to inspire that reaction? “Imagine your train is on time! Yeah, baby, that’s it, and there’s a seat in it….and the seat is not wet with some unknown but too-imaginable fluid! Go with it!”

Even with a paycheck at the end of the day to fantasize about, that’s some amount of excitement. But in all of the print modeling and commercial acting work, my paychecks haven’t been that much anyway, so perhaps I need to get another agent. Or any agent.

Then I recognized how this cover really does capture the zeitgeist of mass transit ridership:

Aside from that, the one message I take from this cover recognizes the diversity. We have:

White men are not welcome on the Metrolink