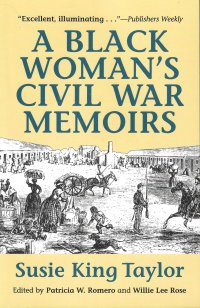 I bought this book in 2018 (I just discovered thanks to an Internet searcher from China), and it was the first book by Author of Color that I grabbed for the 2023 Winter Reading Challenge.

Originally entitled Reminiscences of My Life in Camp when it was published, the publishing house who slapped a new introduction on it to get a fresh copyright re-titled it for the 21st century, knowing what would sell the book–the personal pronoun My does not target the niche audience of university folk, and in Camp is not specific enough for a population that (by my tests in the 1990s) could not date the Civil War to know where camp was or why it was important.

The book basically has two parts: The Civil War-era diary, which details her time after escaping slavery and attaching herself to a military unit as a laundress and teacher of the other freed blacks along with the raising of the first black regiments in the Union army and a couple of their expeditions. The second part comes after the war, a later couple of additions talking about the integration of the newly freed slaves into the society and includes a chapter where the author, a resident of the magical land of Massachussetts (according to the text, Massachussets, as one of the most abolitionist states and forward-thinking in its treatment of freedmen, was legendary amongst the former slaves) to Louisiana. Unfortunately, it was not pleasant (to say the least), and it would be no better sixty years later (as Black Like Me sort of simulates).

The book is very short–154 pages when padded with end notes, illustrations, and a introduction to pad it out. Given that it’s still in print, or it was fourteen years ago, one can assume that it was required reading in some courses or another, but one wonders about fourteen years on. After all, the author is a Christian, and she’s hopeful in the first part of the book that blacks will be treated equally after emancipation, and even in the second part, she’s disappointed, but still hopeful. Which is not what has been sold for the last thirty years and what has been beyond the pale in modern thought in the last decade. You know, after the country elected a bi-racial child of an African and an American. Oh, how I would weep were I not a stoic and/or cynic.