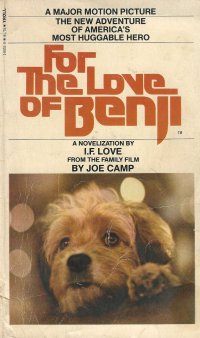 This year’s Winter Reading Challenge has a category called Kids’ Chapter Book–not so strange, as the 2021 edition had a Re-Read a Childhood Favorite category, and the 2022 edition had a Young Adult category. This category looks to be a gimme for serious readers. And I thought I might be in a world of hurt since I not only read Hans Brinker, or The Silver Skates last winter, but I also read several other Doubleday Children’s Classics last year as well. But I found this book which I bought in the spring of 2009 after having seen it twice in two days, and I was set.

As you might know, gentle reader, I prefer Boomer of television’s Here’s Boomer to Benji. Probably because Benji was mostly a movie dog (and not that many, truth be told). This book is the novelization of his second movie, released in 1977.

In it, Benji’s family is on its way to Greece for a vacation when someone–tattoos? marks?–Benji at the airport, and the little scamp becomes an unwitting courier. When he arrives in Athens, he is accidentally set loose, and he evades numerous secret agent types as he looks for his family. Dog chases later, happy ending!

You know, it was probably hard to capture most of the charm of the film, which was undoubtedly a little dog doing amazing things and looking cute, in print like this. So take it for what it’s worth.

I’ve already alluded to it, but I was really surprised how few movies and appearances the various dogs playing Benji made. Two movies with his name in the title, the one with Chevy Chase which must have been excerpted in The Weekly Reader (how old am I? So old that there was a national newspaper for kids distributed free in school–and apparently it continued until 2012, so you might not have to be old old to remember it), and a couple of cameos in other films. And a television special or two. Man, he seemed ubiquitous at that point where the 70s turned into the 80s.

So I got my kids’ book for the reading challenge in, and that’s 2 of a minimum of 5. I am cruising, but I would like to hit most if not all of the 15 categories by the end of February. However, as my last year’s experience indicates, that might be too late for a mug–when I turned in my full sheet last January, I got the last mug, the display mug, in the Library Center branch of the library. Unless they ordered more, this year, I might end up with a librarian’s coffee-stained personal mug. Which is fine by me: Coffee is sterilizing, or so I tell myself when I reuse a mug for the fifth day.