ABC Books hosted James R. Wilder, whose books are set near where I went to high school. I bought the first three books last June right after our De Soto vacation. I read the first, Terror Near Town, earlier this year, but I haven’t gotten to the others yet. Which comes to a total of three more (and the author mentioned he is 8,000 words into the fifth). So perhaps I’d better pick up the pace.

At any rate, look at this: 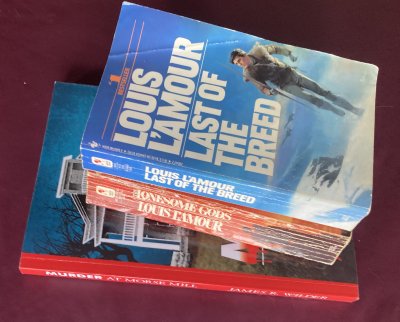 I got Wilder’s latest, Murder at the Morse Mill, and two Louis L’Amour paperbacks–The Lonesome Gods and Last of the Breed (ABC Books did not have Bendigo Shafter, and I forgot that I predicted Conhager would be one of the first L’Amour books I picked up.

I brought my youngest son with me, and he had an ABC Books gift card from Christmas, but he was not interested in buying a book for himself. So he applied it to my purchase, which means I spent less than $10 at ABC Books.

That has never happened before, and is unlikely to happen again.