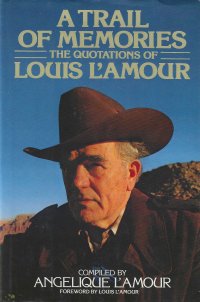 Where the heck did I get this book? A quick search of Good Book Hunting posts does not yield a result. It does not have an ABC Books sticker. It does not have a price penciled on the first page which might indicate another used book store. I certainly did not buy it new as a sixteen-year-old. So I must have picked it up at a garage sale. Perhaps this year’s Lutherans for Life garage sale–I don’t see a Good Book Hunting post for that particular sale this summer, which might mean it was one of a couple books I might have picked up. Without a picture, I have no memory.

At any rate, this book is a what it says: A group of quotations, from a line in length to a couple of paragraphs, grouped in topics like Life, Opportunity, Hard Work, Family and Home, Women, Indians, Honor, the Law, and Justice, and Yondering and Dreaming.

The quotations all share a common flavor and theme, of course: The stoic Western hero on the frontier, skeptical of the soft Eastern ways, manly but not afraid to love and nurture in family ways, which includes education and discipline. It seems like some of the quotations are repeated in different chapters/topics, but it might be because they are so similar–or perhaps they repeat; I did not go back to check. Even though they’re genre and they deal with Men, someone not familiar with genre or prehistoric (that is, pre-social media) writings might be surprised at how in-touch the Western hero was with the environment and how much he respected Indians (that is, Indigenous Peoples, as the current lexicon goes, with its expiration date later in the decade).

Although Louis L’Amour had 101 books in print when this book appeared (maybe just 100, as the book list includes this volume), the quotes are taken from what seems to be a handful of them. But it did help me narrow down which of his books I would most like to read: Bendigo Shafter, The Lonesome Gods, and maybe Conhager. I have read a couple of Zane Grey books, but no L’Amour. And the country was crazy with them in the olden days–I suspect they both had their book clubs in the 1980s. I would say that “I haven’t seen them in the wild,” but let’s be honest: My “in the wild” these days is the Friends of the Springfield-Greene County Library book sale and ABC Books for the most part, and I tend to skip over the Western and/or fiction sections entirely. In earlier days, with smaller book sales, I would be more likely to breeze over the paperback and/or fiction sections where I might see these titles. Perhaps I’ll wander over to the Western section next month at the library book sale to look for these titles.

So a nice thing to read whilst reading other books with longer narratives or themes. Something to spend a few minutes on out on the patio, petting the newly outdoor cat at sunset, staring down the raccoons who are not afraid of humans and want the remainder of the day’s cat food. And then to pick up later.

I did flag a couple of quotations for quick comment.

It is an old custom of these people to pick up a stone and toss it on the pile. Perhaps it is symbolical lightening of the load they carry, perhaps a small offering to the gods of the trails.

Here in the Ozarks we apparently do something similar. When gardening, I tend to toss the stones to the edge of the garden fence. Across the farm road, our neighbor has quite impressive piles of stones in his yard–so much so that we’ve speculated that he’s buried people there. We haven’t asked, however, just in case that’s where he buries people who are too curious.

Alone I was, but he who stands alone is often the strongest. By standing alone he becomes stronger and remains strong.

Compare and contrast with the money quote from Henrik Ibsen’s An Enemy of the People:

You see, the point is that the strongest man in the world is he who stands most alone.

Is L’Amour alluding to that play here? Quite possibly. With a modern author, born after say 1970, it would not be a good bet, but L’Amour is from a time when schools taught things aside from the make believe of modern thought.

4 thoughts on “Book Report: A Trail of Memories: The Quotations of Louis L’Amour Compile By Angelique L’Amour (1988)”