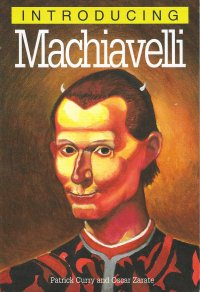 As you know, gentle reader, I am a sucker for these Marxist comic book introductions to various thinkers (see also Sartre for Beginners and Einstein for Beginners), so when I saw this book at ABC Books last August, I knew what I was in for.

So, yes, the book is a Marxist tract that basically implies that Machiavelli was in favor of a proletariat revolution of sorts, but aside from that, it does talk about, yes, The Prince (which is clearly not a satire) and provides context both historical and biographical to its composition.

It has paragraphs (and cartoonish illustrations) that describe Italy of Machiavelli’s time, including the importance of the d’Medicis, the Borgias, and the revolutions and counter revolutions in the city states of the time. So, as I was saying, good context for Machiavelli’s writing and a description of his non-writing career (and how he wanted his writings to ingratiate him to the powerful).

But it recognizes that The Prince is a small part of Machiavelli’s output–apparently, he thought his Discourses on Livy was a more important work–but it gets all the attention and draws everyone’s ire even though it’s a dispassionate study as much as a moral prescription for power. But the book puts it all in context and makes me want to read Discourses on Livy.

Oh, and of course it makes sure to erroneously say that national socialists/fascists are “on the right,” and it does lay out that Margaret Thatcher was pretty close to Hitler (although, the book is strangely hard on Bill Clinton).

So these books are plenty informative, and they’re quick reads since they have less actual text in them than a Diary of a Wimpy Kid book. And they’re funny when you can point at the obvious Marxist insertions and assertions.

I hate to say it, but I rather hope I find more of these books in the wild. I am not so enamored with them that I’ll order them full price, though.