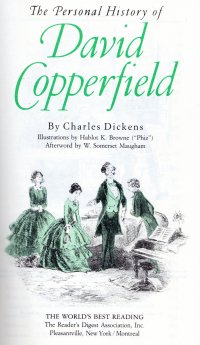 Well, I finished this book, finally. As you might recall, gentle reader, I have been reading it for some time. I started it before I began the library’s winter reading challenge (which I finished on or around February 22), so it was the book I picked up after Wuthering Heights). I read the sixteen books in the reading challenge whilst this book carried a bookmark, and I’ve nibbled at it for four months. Which, truth be told, as a serial, actual readers would have gotten parts of it doled out after years. And, one gets the sense that Dickens kind of wrote it like the writers of Lost with one eye on the reception and chatter of previous installments.

So, to make a long novel a short blog post, the book talks about the aforementioned David Copperfield, who is born to a widowed mother and they live together with a live-in housekeeper, Peggotty. Copperfield’s mother remarried a harsh man, and Copperfield is bundled off to live with the housekeeper’s family, to a cheap boarding school, and then as an apprentice at a wine merchant. Along the way he meets characters to figure in subplots, including the charismatic but ne’er-do-well Steerforth, a childhood associate whom Copperfield admires greatly; Peggotty’s brother and his adoptive family, including the sweet little Em’ly, her eventual betrothed Ham, and old Mrs. Gummidge; Traddles, another school friend, who is dull and plodding but dogged, and the free-spending Micawbers who are often one step ahead of the debt police. Copperfield runs away from the wine merchant to Copperfield’s aunt, the father’s sister, who starts well-to-do but loses it all; a businessman that Copperfield lives with and his daughter Agnes; Uriah Heep, the assistant to the businessman who was such an antagonist that a rock band a hundred years later took his name as their own; the owner of a law firm where David catches on and his pretty daughter whom Copperfield eventually marries; and the absent-minded school professor and his very young wife.

These characters move through the currents and subplots of the book. The main plots are that Heep is slowly taking over the Mr. Wickfield’s business through manipulation and fraud while he continues to act abased, and that Steerforth seduces and runs away with little Em’ly, and Mr. Peggotty vows to wander looking for her until he finds her and brings her home. Subplots include Copperfield’s rise through the trades and becoming a writer; Copperfield marrying his boss’s daughter and being a bit unsatisfied in the match; the loss of the aunt’s fortune; and, to be honest, a whole lot of other threads run through the book. The characters wander in and out and combine and recombine. The book has 747 pages in this Reader’s Digest World’s Best Reading edition, so Dickens could take his time–and he did.

The chapters and sections move leisurely, so it’s okay to take it slow and read it in portions, wandering away to movie tie-in paperbacks during the reading. The book meanders quite a bit into the subplots, character studies, and explanations of different elements of Victorian England. However, about 150 pages before the end, suddenly Dickens gets the urge to wrap things up, and so he starts rather abruptly resolving things–the pace of the last dozen chapters or so is quite faster than the others. I often have this knock on men’s adventure paperbacks, too, so maybe I’m just not ready for the books to end when they do.

At any rate, I enjoyed the book, sometimes more than others, and I’m glad to have read it. Although I just picked up The Pickwick Papers this weekend, I probably won’t dive right into it. Perhaps Dickens will only be an annual tradition with me (Barnaby Rudge being last year’s Dickens). However, I certainly have a soft part in my heart and a large part of my bookshelves (well, relatively, but probably less than Stephen King) for Dickens.

But I did put some markers in the book. Let’s see if I can recreate what I was thinking some months ago.

I Know The Feeling

Steerforth and Copperfield are talking:

“I was looking at pictures in the fire,” he [Steerforth] said.
“But you are spoiling them for me,” said I, as he stirred it quickly with a piece of burning wood, striking out of it a train of red-hot sparks that went careering up the little chimney and roaring out into the air.
“You would not have seen them,” he returned.

Around the time I read this, I was probably just fresh from completing a poem about watching the fire.

Also, although I did not mention it above, but the relationship between Copperfield and Steerforth kind of matches my relationship back in the day with my friend from high school. So that was aespecially poignant.

Copperfield talking to his boss at the law firm:

I asked Mr. Spenlow what he considered to be the best sort of professional business? He replied, that a good case of a disputed will, where there was a neat little estate of thirty or forty thousand pounds, was, perhaps, the best of all. In such a case, he said, not only where there very pretty pickings, in the way of arguments at every stage of the proceedings, and mountains upon mountains of evidence in interrogatory and counter-interrogatory (to say nothing of an appeal lying, first to the Delegates, and then to the Lords); but the costs being pretty sure to come out of the estate at last, both sides went at it in a lively and spirited manner, and expense was no consideration.

This thing with law and its practictioners has been going on for a long time. Who knew? People who read old books know. Which is why, perhaps, “society” is moving away from reading old books. Because it’s easier to manipulate the populace into ignorant action when the populace thinks that everything is happening for the first or greatest time RIGHT NOW.

(For information about the allusion to St. Louis County Family Courts, see here.)

I have often remarked-I suppose everybody has–that one’s going away from a familiar place would seem to be the signal for change in it. As I looked out of the coach-window, and observed that an old house on Fish Street Hill, which had stood untouched by painter, carpenter, or bricklayer for a century, had been pulled down in my absence, and that a neighbouring street, of time-honored insalubrity and inconvenience, was being drained and widened, I half expected to find St. Paul’s Cathedral looking older.

One of the Jeopardy! clues when that turncoat bastard Aaron Rodgers was hosting was about the oldest cathedral in London. I answered, confidently, incorrectly, Westminster Abbey. The answer is St. Paul’s. In my defence, I have never been to London.