So let’s get on with Christmas presents: I am often underwhelmed on the gifts I receive. Sometimes, it’s a little premature that I look askew at something under the tree, as the time when I got a Keurig single-use coffee maker which I thought I would never use, but as my life changed from upstairs-mind-the-children-by-the-coffee-pot to get-up-early-and-go-to-my-desk-without-waking-anyone-else-up, I use it every day. But sometimes I get some things that I’ll never use. Like an embosser that would put my initials in all my books–jeez, my hand hurts just thinking about using it.

This year, I received a Battery Daddy. 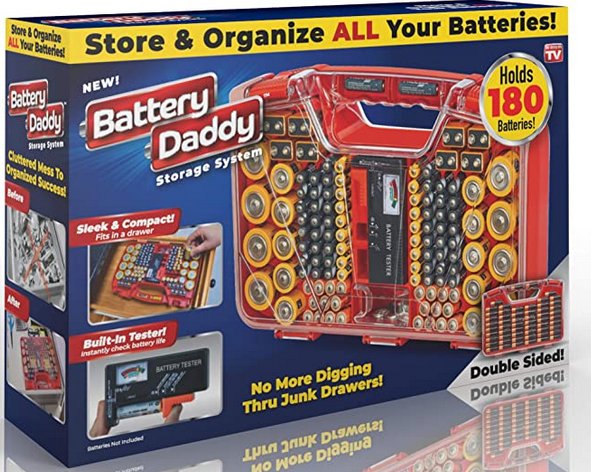 Which is a nice thought as I have a whole desk cubby stuffed with batteries, but it’s more than 180 batteries. Also, although the Battery Daddy says it has place for 8 button batteries, I have far more than 8 button batteries of various sizes, not to mention a couple spare rechargeable batteries for sundry devices. Well, they might be spares, or they might be the old ones I replaced waiting for me to take them back to the battery store the next time I need to replace their replacements. Regardless, this packaging would only neatly store some of my batteries, so I’ll probably continue with the existing system, which is old check boxes with sorted batteries. Not an unsorted junk drawer.

I also got this piece of Packerphernalia: 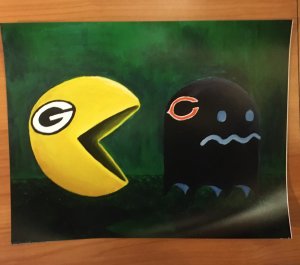 My mother-in-law tends to get me Packers stuff, as I generally get her Mizzou things, our respective gift schticks. She also gave me a calendar; looking on the back, I only know the numbers if a couple of the players these days, which means I am getting old, I guess. As to this particular bit of art, I opened it, and I liked it right away, and my thought process went, a bit slowly, like this:

I like it…. Hey, that’s kind of like that thing on the wall at that sports bar…. Coyote’s Nixa…. I took a picture of that and texted that to my mother-in-law…. With the message “Christmas gift idea….”

She found something similar on Etsy, I guess.

I also got a gift certificate to Stick It In Your Ear, a full price record store downtown–and the intel that they know someone who works on old stereos, so perhaps when this person returns from Europe I will be able to play records on the console I inherited from my aunt–and you probably won’t get me out of my living room. I got gift certificates to Relics Antique Mall which I will be more careful with this year since I know they expire relatively quickly. To be honest, I already have an idea on what I want to get–I saw a starting fencing set for about fifty dollars; I think it said it contains 2 sets of everything. If it has two vests, two masks, and two foils, I will be all over that. And in case you’re wondering about that trip to Relics that I took for last-minute gift buying last weekend, I might have picked up a record or two–but I did get some nice gifts for others as well.

More important than what I got is what I gave. The home run gifts this year were those silly-but-expensive titles of nobility. I bought the oldest a Lord title in Sealand whose story he loves. I couldn’t let the older boy be a lord and not the younger, so I did a thing where I bought a square foot of Scotland to for the youngest, and according to tradition, any landowner in Scotland is called “Lord.” To be honest, the he is more excited about owning the land than being the Lord. So that worked out. Other gifts included apparel with the logos of the older boy’s high school for everyone, pajamas (a tradition here at Nogglestead), and socks for my beautiful wife. That’s right, mostly clothes.

My boys are becoming young men with tastes that make them more difficult to buy for. I try to get everyone something unexpected and delightful, something they would not have thought of but that I did. I don’t think I did as well this year as in years past–such as the 2007, the year that I had my wife’s then-unused trumpet re-silvered and repaired, and she cried with joy and asked, “How did you know?” To be honest, that’s a hard bar to clear again, but I’m ever hopeful.

And I always start very early in the year buying gifts, so when it comes time to opening them, I get the same surprise that they do. I wandered away when my brother and nephew started opening their gifts, and my brother thanked me for the tie. “What tie?” I said. “The Marine Corps tie,” he said. Oh, yes! The one I bought in Branson in May, when I predicted:

On the way back from breakfast on Monday, we stopped at a craft mall and bought a couple of Christmas gifts which I’ll wrap up and forget what they are by Christmas. Which gives me the same surprise and joy for the gifts I give that I get for the gifts I receive.

I also got my nephew the first two books in the Earthborn series, probably in June right after I read the first, Earthborn: Awakening.

At any rate, you might be wondering if I have started Christmas shopping for 2021 yet. Well, I have been burned in each of the last two years by people dying before Christmas. But that won’t dissuade me. One of the gifts I ordered for my wife has yet to arrive, so that’s either a gift for her birthday or a gift for Christmas. As to buying for my boys, well, there’s no telling what they will be into in a year, whether interests or, heaven forfend, clothing sizes. So I will likely wait until at least spring before I start for them.

1 thought on “The Christmas Gifts of Nogglestead, Only Slightly Snarked”