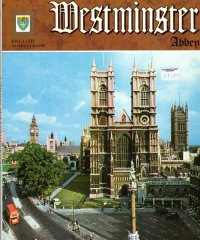 I bought this book at Calvin’s Books in June; I don’t know if I will watch a lot of football these days, so I have decided to flip through these travel books as a brief interlude while I read longer works. And my response to this book is much like that to Windsor Castle: Wow.

The book has text describing the history of Westminster Abbey along with its various renovations throughout the centuries. The pictures depict the rooms, the effigies, the tombs, and the artifacts you can find on site. And as with Windsor Castle, I’m almost moved to go see it. I suppose I should sooner rather than later, although that’s not necessarily possible in the short term. The pessimist side of me suspects before long it will be a mosque. Although when one factors in historical scope, “before long” could be a hundred years.